$100+ Million NYC Apartment Barrier Will Be Broken By A Sheik

[Update Below] One57, the 90-story glass tower rising across from Carnegie Hall, may break not one but two real estate records this year. The tower already broke the record for most-expensive apartment in NYC when an unfinished 10,923-square-foot duplex sold for $90+ million and now, the Post reports, the building is getting ready to break it again. It seems the Prime Minister of Qatar is ready to spend some serious bucks. 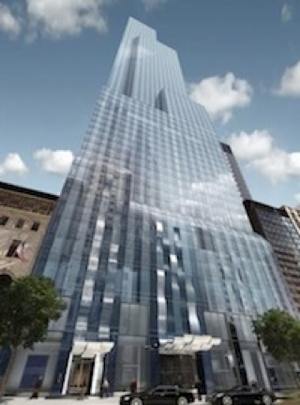 A rendering of the finished One57.

According to the paper, the pol is eager to find a New York residence but has been having a lot of difficulty getting past exclusive boards—something about having two wives, 15 children, and a huge entourage? Not to mention his diplomatic immunity, which might be an issue if he treats common charges like most diplomats treat parking tickets. Sheik Hamad bin Jassim bin Jaber al-Thani was reportedly set on getting Huguette Clark's old place before turning to One57—where he is reportedly going to spend more than $100 million on the penthouse duplex.

So what's the PM going to get for his troubles? 10,923-square-feet of opulence boasting views up and down Manhattan plus "a 'grand salon,' a large mezzanine, four fireplaces, floor-to-ceiling windows, at least five bedrooms, and motorized window shades, Realtors said." And that's not all!

While negotiating to buy the 10,923-square-foot spread, Sheik Hamad also opened discussions with Extell Development about buying a cluster of four separate, full-floor condos in the 90-story One57 building, at 157 W. 57th St.

That would up the total purchase to a staggering $250 million, sources said.

Damn: we feel very, very, very poor. But hey! Our "penthouse" Brooklyn apartment features a bed that dances when the train rolls by, a closet with another closet inside, spectacular views of the buildings across the street and a built-in air conditioner from roughly 1978. We may not own it, but we'd happily sell the place to the Sheik for a few cool mil. He can even keep the furniture—just not the cats.

Update: Gary Barnett, president of Extell Development Co., says that the rumors are not true.
The apartment, which was listed for $115 million, does seem to have found a buyer though. According to Barnett the "rumors that the buyers were from the former Soviet Union or the Middle East were incorrect. 'Neither is on the right continent,' Mr. Barnett said, 'So they have another five guesses to go.'

#manhattan
#midtown
#one57
#qatar
#real estate
Do you know the scoop? Comment below or Send us a Tip
A new Gothamist is coming! We’ve moved comments over to our beta site. Click here to join the conversation and get a preview of our new website.