Sure, 1 World Trade Center may now be the tallest building in New York City, but now its long-promised plan to be 1,776 feet tall is in jeopardy. Does this mean the terrorists win?! 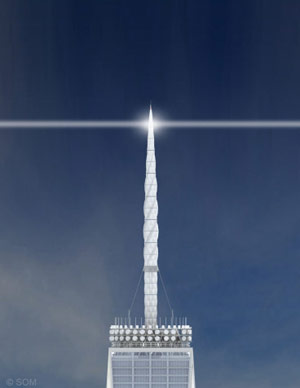 The mast (Skidmore Owings & Merrill)
According to CityRoom

, the skyscraper's "claim to the record books has been undermined by a decision not to build a sculptural fiberglass-and-steel enclosure for the central mast atop 1 World Trade Center."

The Council on Tall Buildings and Urban Habitat

, the private body that serves as a worldwide arbiter of building heights, will ultimately count or discount the mast in its height determination for 1 World Trade Center based on whether it is considered a functional antenna or a nonfunctional spire.

The decision to remove the cladding from the mast was made in January, said Douglas Durst, who is co-developing 1 World Trade Center with the Port Authority of New York and New Jersey...

If the unclad mast is regarded as an antenna, the Council on Tall Buildings will almost certainly not allow it to be included in the calculation. That would mean that 1 World Trade Center would lose both its symbolic dimension and its claim to unseating the Willis Tower in Chicago as the tallest building in America. Should the mast be regarded as an ornamental and nonfunctional spire, however, the equation would change in favor of 1 World Trade Center.

Skidmore Owings & Merrill architect David Childs, who designed the building, released a statement saying," We are disappointed that a decision has been made to remove the sculptural enclosure at the top of 1 World Trade Center. Eliminating this integral part of the building’s design and leaving an exposed antenna and equipment is unfortunate. We stand ready to work with the Port on an alternate design that will still mark the 1 World Trade Center’s place in New York City’s skyline." The SOM website also describes the antenna part of 1 WTC, "The antenna consists of two major components: a 408 -foot mast and a communications platform ring. The mast is a hybrid structure, consisting of a steel tower supporting the antenna and a special protective enclosure, called a radome, that is transparent to radio waves."

The cladding would have cost $20 million, but the real concern, according to Durst, was the looming headache of maintaining the radome. He told the Times, "There was no real method to maintain or repair the radome," and "his colleagues in the Durst Organization likened any such effort to something out of 'Mission Impossible.' They said that if one of the hundreds of fiberglass panels in the radome were damaged by lightning or ice, climbers would have to scale the radome, winches would have to be installed in the upper reaches of the tower, and cables would have to be lowered to the 9/11 Memorial plaza, where replacement pieces weighing thousands of pounds would await." Come on, just hire Tom Cruise!