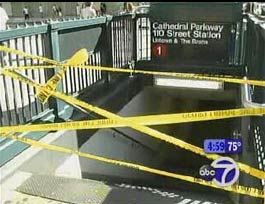 Two groups of teenagers on an northbound 1 train got into a fight that ended up with two teen slashed. The fight started around the 59th Street/Columbus Circle stop or the 96th Street stop, and then it spilled out onto the platform at 110th Street/Cathedral Parkway. Two were slashed with a knife and another teen was beaten with a cane; all were treated at St. Luke's Roosevelt. A witness told WABC 7, "I was in my car and I heard screaming ... from downstairs ... bunch of boys ran out and then this other guy ran up."

The stop is a few blocks south of Columbia University and the area is usually very busy. SubwayBlogger was on a 1 train while police were investigating at 110th: "The place was crawling with NYPD and rescue." And Newsday reported one resident as saying, "This is a grassroots problem. Anybody who rides the rails knows that the kids are a real menace."

The 110th Street/Cathedral Parkway station is no stranger to violence. In July of last year, a man took two construction workers' saws and "sliced open" the chest of a 64-year-old postal worker. The attacker, Tareyton Williams, was sentenced to 18 years in prison; his victim, Michael Steinberg, forgave him but doesn't forgive the MTA for allowing this to happen.