At least one person was killed and multiple people were injured during pre-West Indian Day Parade festivities in Brooklyn early Monday morning. That included Gov. Cuomo's first deputy counsel, who was shot in the head by a stray bullet on Bedford Avenue.

A 24-year-old man was fatally stabbed and a 21-year-old man was shot in the buttocks just after 2 a.m. at Grand Army Plaza and Eastern Parkway, where the annual J'Ouvert Festival march was scheduled to start at 4 a.m. Both men were taken to New York Methodist Hospital. The man who was shot is in stable condition, and is expected to survive.

There were three other shootings in the area early Monday: cops say that Gabay was shot in the head on Bedford Avenue near Sullivan Place in Crown Heights around 3:45 a.m. Then around 4:20 a.m., a 39-year-old man was shot twice in the torso at Martense Street and Nostrand Avenue in East Flatbush. He was taken to Kings County Hospital and is expected to survive. 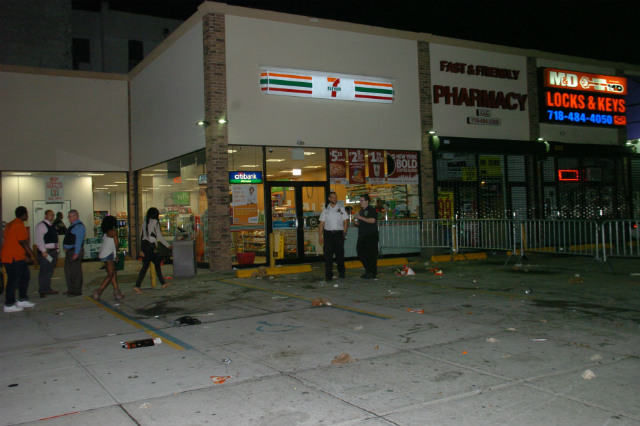 A 20-year-old man was shot around 4:30 a.m. at Empire Boulevard and Bedford Avenue in Crown Heights. He was taken to Kings County Hospital in serious condition. The News reports police arrested a suspect at the scene.

More than 1,500 cops were sent out in Brooklyn to monitor the pre-dawn West Indian Day Parade festivities. A police source lamented to the News: "We don't have stop and frisk anymore. So, obviously, all the stuff we had stopped them from doing will start over again. The pop-up parties are them drinking all night. They'll see you driving around and stop what they're doing."

#brooklyn
#j'ouvert festival
#prospect heights
#shooting
#west indian day parade
#original
Do you know the scoop? Comment below or Send us a Tip
A new Gothamist is coming! We’ve moved comments over to our beta site. Click here to join the conversation and get a preview of our new website.