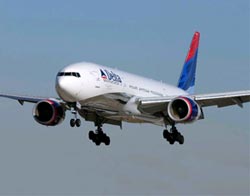 A Manhattan lawyer blames Delta Airlines for ruining his mother's 80th birthday celebration and is suing the airline for $1 million. Richard Roth says a Delta employee made them miss a flight to South America and losing their luggage for days, telling the Post, "It was the most outrageous experience I've ever had in my life. It was an absolute disaster. One catastrophe after another."

Roth's lawsuit lists a series of grievances, from a "nasty" stewardess who wouldn't let them know if their connection was on time (the family was flying from Westchester to Buenos Aires, with a connection in Atlanta) to a Delta agent who claimed their flight had taken off when it hadn't ("The pilot is not in charge here. I am. All the pilot does is fly the plane.").

Oh, and the family was also told, when they missed their flight to Argentina, that Delta couldn't fly them there for another 2 1/2 weeks. So, after two nights in Atlanta, the family drove from Atlanta to Miami, where they caught a flight to South America.

Roth, who used frequent flier miles for his tickets and misplaced luggage, says he just wanted $21,000 in compensation, but Delta was unresponsive. Now he wants that $21,000, plus $275,000 in compensatory damages for emotional distress and plus much more for punitive damages.

#damages
#delta airlines
#incompetence
#lawsuit
#rude service
Do you know the scoop? Comment below or Send us a Tip