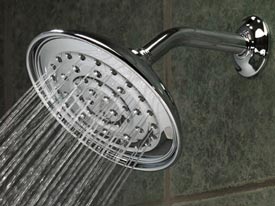 Sometimes, there's nothing quite like a hot shower, but an elderly Bronx man got more than he was bargaining for with his shower. In 2004, 88 year-old Daniel Feliciano was showering when the water suddenly became "super hot", causing him to fall in his tub. He was treated for burns to his arms, abdomen, thigh, legs, and groin and was bed ridden in the hospital for three months and an additional three months at home. Tests found the water to be 180°.

The Post found that the case was recently settled through arbitration for $960,000. The payees on the settlement include Concourse Housing Corp. (owners of the building who will pay most of the settlement), the plumbers who installed a thermostat before the accident, and the agency that provided the nurse who was supposed to help him bathe.

According to the US Department of Energy, water needs to be at 120° for most household functions. The settlement amount should be good for lots of sponge baths, which is probably all Mr. Feliciano would want to take after this incident.

#bronx
#elderly
#hospital
#housing
#News: NYC
#the post
#us
#US Department
Do you know the scoop? Comment below or Send us a Tip