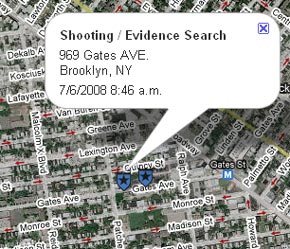 A July 4th weekend barbecue turned tragic when a group reportedly "crashed the party and unleashed a barrage of gunfire." A 21-year-old woman was killed and four others were taken to the hospitals.

A party was being held behind 969 Gates Avenue in Bedford-Stuyvesant--which is just down the street from the 81st Precinct. Around 1 a.m. yesterday, the shooting began. One witness told the Sun, "It was a rapid succession of shots. After that, the music stopped, people started screaming, and that was it — it was all over quick."

The father of a 19-year-old woman, Imani Walker, who was shot in the chest said, "There were kids laying around - it looked like a war zone." Walker is in critical condition at Kings County Hospital, and another woman and two men (per the Daily News, "including one man who uses a wheelchair since being paralyzed years ago by a gunshot").

The fatality was Zeanie White, a Kensington resident who attends York College; she was shot multiple times and died at Kings County. Her aunt told the Post, "She was well raised and well respected. Her mother couldn't ask for a better daughter. [Her parents] are devastated." The police are looking for an unknown number of shooting suspects.