1 Dead, 3 Injured In Shooting At Irving Plaza During T.I. Concert

A 33-year-old man is dead and three others—including rapper Troy Ave—suffered injuries after shots were fired at a rap concert at Irving Plaza last night. Police are treating the death as a homicide, and the violence may have started in the green room. Concertgoers called the flight from the venue a "stampede."

T.I., the headliner, hadn't appeared yet when the gunfire erupted during openers Maino and Uncle Murda, who were performing around 10 p.m.

Gunshots just went off at the T.I concert, never been so scared in my life pic.twitter.com/rn0CjpAuaU

The Daily News reports, "The chaos erupted backstage shortly after 10 p.m., with a fight in a green room above the stage of the Union Square venue." According to WABC 7, "There were metal detectors for T.I. concert-goers at Irving Plaza. All the people in the green room were credentialed, and it is possible the suspect was also credentialed."

However, one attendee called said there wasn't much security, "They didn't search nobody, they didn't check no IDs."

Police say that a 30-year-old man—Troy Ave—went to NYU Hospital on his own for a gunshot wound to the leg.

Dont wanna speculate but we walked in right after troy ave and then the shot rang off upstairs by the green room.

@Missinfo I was there... Scary sight... Troy ave is a dick head

One concertgoer said, “When [T.I.] was about to go on, we saw two people up on the VIP arguing and then everybody just started running cause they heard the shots."

Evacuated after shots fired while crowd waited for @Tip tonight at @IrvingPlaza pic.twitter.com/2hDT9qgO9t

"the carnage started as a beef between two rival crews associated with Maino and rapper Troy Ave. The gunman and the victims were all credentialed guests with access to the VIP area, a source said." A person in the green room said the altercation "was a fight over a push, it was over some b-------. It was like 50 or 60 people in the VIP room. It was crazy. It’s crazy more people didn’t get shot.” 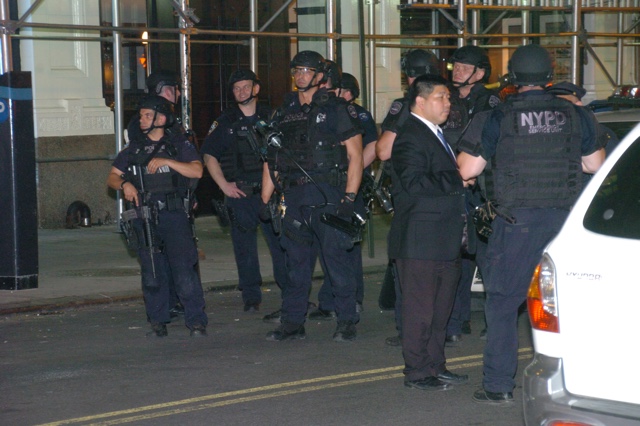 A woman in the VIP section told the AP, "The girl next to me was shot point blank, and men picked her up and carried her out. For two to three minutes we still heard firing, still heard shots, we were clutching each other making sure no one was getting hit."

No arrests have been made and the investigation is ongoing. Police Commissioner Bill Bratton said this morning, “We feel we’ll wrap it up very quickly. The crazy world of the so-called rap artists who are basically thugs that basically celebrate the violence…and unfortunately that violence often times manifests itself during their performances and that’s exactly what happened last evening.”

#HOMICIDE
#irving plaza
#Maino
#murder
#shooting
#T.I.
#Troy Ave
#Uncle Murda
Do you know the scoop? Comment below or Send us a Tip
A new Gothamist is coming! We’ve moved comments over to our beta site. Click here to join the conversation and get a preview of our new website.