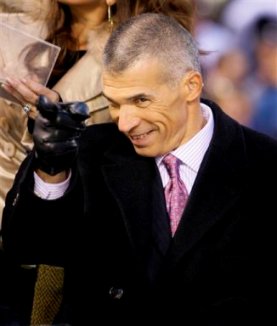 The Yankees have offered Joe Girardi the job of manager, further emphasizing the fact that the Steinbrenner boys, and not their father, are now in control. According to reports, Girardi has been offered a three-year deal worth approximately $2-million a season. Negotiations are described as “ongoing” currently. As a side note, Don Mattingly has apparently turned down an offer to coach on his staff.

Assuming Girardi accepts the offer, he will take control of a team in transition. A-Rod has opted out and won’t be back. Posada, Rivera and Pettite all could leave as well. Hank Steinbrenner, who appears to be the new voice of ownership, has already suggested that fans be patient with next year’s team. Could this mean the Yankees are actually going to rebuild for a year?

We won’t know for a few days, but the opportunity is clearly there right now. Young pitchers are coming up and the farm system is as good as it has been in years. It’s hard to believe the Yankees would actually take a step or two back, but a new approach could be a welcome sight.

One thing’s for sure, Alex Rodriguez has lost all the goodwill he created in New York and beyond. Red Sox fans chanted “Don’t sign A-Rod” last night as their team celebrated a World Series and from the Post to ESPN, the timing of his opting out has been thoroughly derided (though perhaps welcomed by Yankees fans wanting to spoil Boston's media moment).

Photograph of Joe Girardi during Game 3 of the World Series