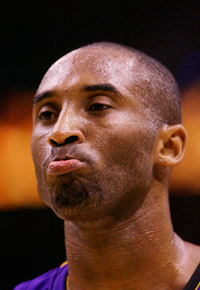 With Kobe Bryant's trade demands in and out of the news, Gothamist wonders what Isiah Thomas would give up to put Bryant in a Knicks uniform. If you follow basketball, you know that Kobe has on again, off again, on again trade demands, and there's a video being shopped around where Kobe says some disparaging words about Lakers management and Andrew Bynum. The Lakers say that they won't be trading Kobe - and why would they - but when Thomas first heard of Byrant's trade request, he did think of a package.

The Daily News thinks it would take a miracle for the Knicks to get Kobe. The News talked to one basketball executive who said the Knicks trade package would be the less than breathtaking combination of Jamal Crawford, Channing Frye and David Lee - Eddy Curry is supposedly untouchable. The exec also says:

"Are you kidding me? If you were allowed to trade the Knicks entire roster for Kobe, I bet they would still win 33 games next season with Kobe and a few rookies, young players and veterans.

"The Lakers are not going to trade the best player in the league for three guys that were not even full-time starters last season."

Ouch. The truth sure hurts! It's almost more surprising that Thomas wouldn't trade the team's 1st round draft pick for the next 10 years along with Crawford, Frye and Lee.

Of course, all this is irrelevant because the Lakers would be foolish to trade Bryant to anyone this off season (Bryant can't opt out of his contract until after the 08-09 season). And Bryant, who reportedly says he wants to go to the Bulls in the video, would be foolish to accept a trade to the Knicks. Especially since they would have to mortgage their future to get him.

Photo of Kobe Bryant in a Western Conference playoff game against the Phoenix Suns by AP/Ross D. Franklin