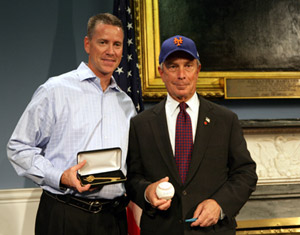 Last Sunday, Mets pitcher Tom Glavine finally won his 300th career game with a victory over the Chicago Cubs. To honor Glavine, Mayor Bloomberg presented the 41-year old lefty the Key to the City on Wednesday. This was enough to upset at least one New Yorker.

The Politicker noted that a caller to the Mayor's radio show today suggested that Bloomberg should have rescheduled with Glavine considering the city's subway system was deluged by early morning rain. The caller asked, “Who would want the key to the city that day?" and Bloomberg responded, “Maybe you’re a Yankee fan." Bloomberg also said that he was paying attention to the subway issue and visited affected areas of the city before the ceremony.

Wednesday is probably a day where Bloomberg didn't opt for a ride to the subway, but took his SUVs all the way to City Hall. It was also the 2nd time in 8 days that Bloomberg awkwardly donned the baseball cap of a local team.

#baseball
#bloomberg
#chicago
#chicago cubs
#city
#City hall
#cubs
#Last Sunday
#mayor
#mayor bloomberg
#mets
#new yorker
#radio
#rain
#subway
#the city
#The Politicker
#Tom Glavine
#Wednesday
Do you know the scoop? Comment below or Send us a Tip
A new Gothamist is coming! We’ve moved comments over to our beta site. Click here to join the conversation and get a preview of our new website.