Why I Made a 24-Hour Donut Pilgrimage to Philly The man sitting in front of me on a Bolt Bus bound for Philadelphia giggles to his female friend, blue Solo cups in their hands. His comment explains the glugging sound earlier and their exuberance for life at such an early hour.

This is what pure happiness—or alcoholism, or both—looks like on a Sunday morning. But soon, after my bus reaches 30th Street Station, I, too, will encounter a similar level of ecstasy, coasting high not on booze, but sugary, glazed goodness.

Some people fly to Paris for a baguette and duck confit fix, others might road-trip to Kansas City for ribs. But I like to keep it local(ish), which is how I found myself heading to Philly for 24 hours on a simple quest: to stuff my face at Federal Donuts, the much-heralded mecca for fried treats and fried chicken.

Now, I’d never been to Philadelphia. Rocky, right? Art. Rittenhouse Square. A bell of some kind. And they even have a "donnoli," another new Frankenstein dessert hybrid. Seems nice. But after hovering around New York’s donut-sphere for too long I was only interested in one thing. (Peter Pan, Dough, Doughnut Plant, Cinnamon Snail, Dun-Well, Donut Pub—been there, inhaled those, next please.) Yelpers hail Federal Donuts as "really effing good," "uniformly delicious," and "knock your socks off phenomenal." It’s made more "best of" lists than I could count. Could the entire Internet be wrong?

Back on the bus, traveling with a singular mission became exhilarating, even drowning out the neighboring riders’ tipsy conversation about the plot line of Once Upon a Time. After the one hour and 45 minute ride, my friend and fellow donut connoisseur Ravi and I jump out and find our friend Kathy, who lives in Philly and just the day before ate Federal Donuts "backstage" while a bridesmaid at a wedding. Bride-approved? This seems like a good sign. She drove us to the Center City shop on Sansom Street. Before even setting foot inside, I’m wary.

Where was the line, the crowd, the Instagram whores?! 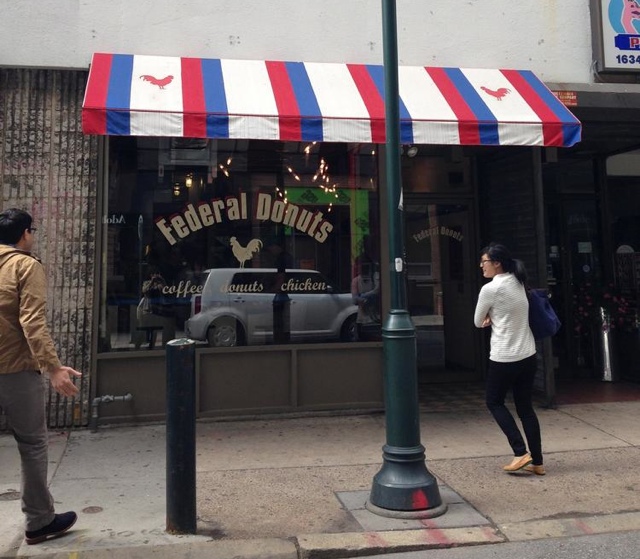 Wait! You see, Philadelphians aren’t insane. They calmly buy their treats—at one of multiple locations, Dominique Ansel—and move along. Despite worries about them running out (they open at 7 a.m. and sell until they’re gone) at 10:30 a.m. all was relatively quiet inside the minimal space with plenty of donuts still caged behind glass. There are a few gents carrying newspapers, teens nibbling, that weekend feeling of happiness in the air. Behind us in line a mother tells her son, "These are special donuts." I hope for her kid’s sake and my own that she’s not a pathological liar.

We order every flavor of "fancy donut": Chocolate Strawberry, Sticky Bun, Marshmallow Marshmallow, Cookies & Cream, Chocolate Sea Salt, and the tres exotique Crumberry at $2 each, plus one of every "hot fresh donut" in Vanilla Spice, Strawberry Lavender, and Cinnamon Brown Sugar varieties ($1.25 apiece). They all look stupidly gorgeous and perfect in an artful way, until we hack them into fours and demolish them with our mouths.

Chocolate Sea Salt tastes like the first donut you ever ate—you were five and it was a maple bar and seemed enormous, endless, but quickly disappeared—and Cookies & Cream tastes like maybe the last donut you’ll ever eat, because you’ll request a dozen of them on your deathbed as nothing would make a better last meal than these pillowy, chewy, perfect little halos of heaven. 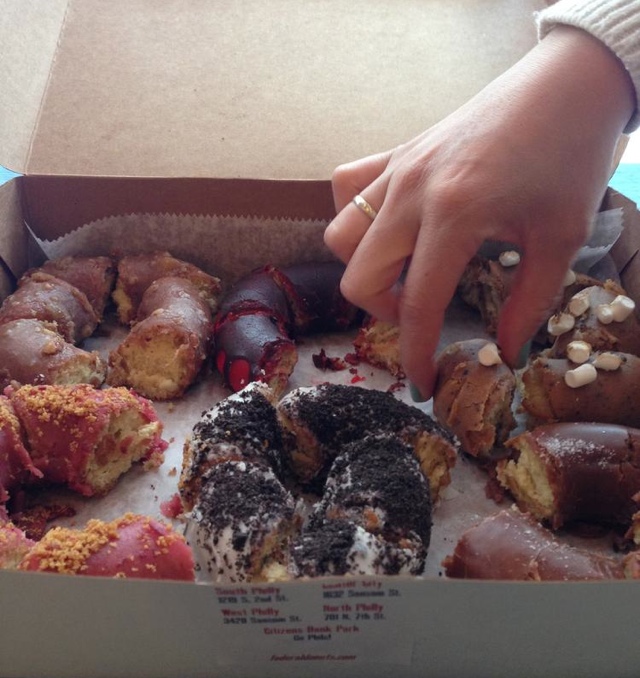 Or, you know, they taste like really good donuts.

Afterwards there was nothing to do but wait until 11 a.m. when the shop started selling its signature Korean fried chicken with ballpark BBQ, Shabazzi, and buttermilk ranch dry seasonings, and chili-garlic and honey-ginger wet glazes. We waited.

The chicken was delicious, of course, but my judgment was slightly impaired. I was drunk on donuts.

Federal Donuts has locations in Center City, and South, Center, West Philly, and the ballpark. Go here for more info.

BoltBus travels from Manhattan to Philadelphia’s 30th Street Station nearly every hour from stops on W. 33rd and 11th Ave. and 6th Ave and Grand St. Solo cups, wine, and donuts not provided.

#donuts
#gothamist getaways
#philadelphia
#travel
#original
Do you know the scoop? Comment below or Send us a Tip
A new Gothamist is coming! We’ve moved comments over to our beta site. Click here to join the conversation and get a preview of our new website.