Where To See Fireworks Outside Of NYC On July 4th

Mayor de Blasio did Queens and Brooklyn the favor of blessing them with East River fireworks this year. But if you're lucky enough to flee the city for the weekend, you'll still have a chance to take in a spectacular show. Here's where to see them: 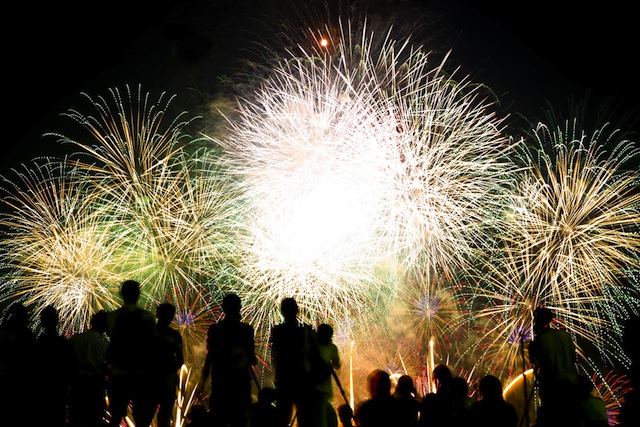 Jersey City: Jersey City's not exactly a far journey from Manhattan, but if you're stuck west of the city this July 4th, take comfort in knowing New Jersey's throwing its own epic fireworks celebration over yonder. Jersey City mayor Steven Fulop's planned a massive show in Liberty State Park, with the Statue of Liberty and the New York Harbor taking front and center in the background. Head to the Jersey City waterfront for the show—which kicks off at a still unannounced time—for the festivities, which Fulop says'll likely draw over 100,000 people this year.

West Point: If you happen to be near the Hudson River Valley on Independence Day, military academy West Point puts on quite a fireworks display to celebrate the 4th. The celebration starts at around 8 p.m., and lasts for 15 to 30 minutes; you can watch it from across the river, or hit up a special celebratory cruise to get a bird's eye view.

The Poconos: Taking cool refuge in the Poconos for the weekend? Check out the area's famed fireworks display, launched over the lovely Lake Wallenpaupack. Now in it's 18th season, this year's show kicks off at 9:15 p.m., and is best seen from the Pocono Lake Region Chamber of Commerce, though you can check out the display from elsewhere near the lake, too. If you do choose to watch it from the Chamber of Commerce, note that small donations are accepted and encouraged to keep the show going.

Pittsfield, MA: For those of you who'll be heading to the Berkshires on Independence Day, the city of Pittsfield is known for putting on a rollicking fireworks show to fete the holiday. Pittsfield's show kicks off at 9:30 p.m., and is best seen from the city's Wahconah Park. Arrive early for a good seat by the baseball field, and be prepared to cover your ears if the booms get too loud.

#fireworks
#gothamist getaways
#july 4th
#original
Do you know the scoop? Comment below or Send us a Tip
A new Gothamist is coming! We’ve moved comments over to our beta site. Click here to join the conversation and get a preview of our new website.