Welcome to The Hall, Mr. Met 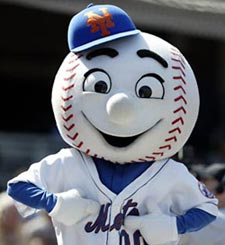 In what could be his biggest personal accomplishment ever, Mr. Met is going to the Mascot Hall of Fame. Yesterday, the Mascot Hall of Fame named Mr. Met a member of its 2007 class along with the San Antonio Coyote. The Post, which is thumping its chest with the news, talked to Mets spokesman Jay Horowitz, "We're thrilled at what he does. He does a lot of good charity work, the kids love him, and we're proud that Mr. Met is in the Hall of Fame." Mr. Met makes the hall despite losing to the Coyote in fan voting. A hall spokesman said, "Fan voting wasn't the whole deal. The committee saw that it had to happen."

Mr. Met and the Coyote join such recognizable mascots like, 2005 inductees, San Diego's Famous Chicken, the Phillie Phanatic, and the Suns Gorilla, 2006 inductees, Clucth the Bear (the Houston Rockets), the Jazz Bear, and KC Wolf (the Royals). Hopefully the hall recognition won't go to Mr. Met's head - it seems like he has enough problems getting through doors already.