Wave Crashing In Wales: The Best Place To Try Coasteering

I'm bobbing in the freezing sea along Pembrokeshire, a desolate, wildly beautiful county in southwest Wales. My guide and I are tucked into a little bay, but the water is choppy, driven into a frenzy by the high wind. I know in my head I'll be fine—I'm wearing a life vest over my wetsuit along with a helmet. I trust my guide, who swims like the seals that frequent this coast. Still, as I'm pushed by the surging, frothing tide toward the shore's shrapnel-sharp rocks, I wonder just what in the hell I was thinking when I signed up to go coasteering.

Never heard of coasteering? Neither had I before a recent visit to country, at the invitation of Visit Wales, the country's official tourist board. The term was first coined 40 years ago, though it wasn't until the mid-'90s, when local company Preseli Venture began offering all-season coasteering tours of the Pembrokeshire coastline, that any more than a few adrenaline-addicted nutters ever tried it. Today, there are coasteering outfits located throughout the U.K. but Wales remains the epicenter for perhaps the world's most rarefied adventure sport. One of the looniest, too, as I fast discover.

It's one thing to learn what coasteering involves when you're perched warm and dry in Preseli Venture's digs. You hear "cliff jumping" and "rock climbing" and "cave exploration" and you think, "Really, how hardcore can it be? Kids do it, right?" Old folks, too, you've been told. It's another thing entirely to scramble over a jumble of lichen-slickened rocks that could snap your ankle in half and plunge into pissed-off sea that even in June is barely 50 degrees. It's cold, it's scary—and yes, it's exhilarating, too. You can't believe you're doing it, but at the same time you're oddly glad you're spending three hours braving the Pembrokeshire coast. 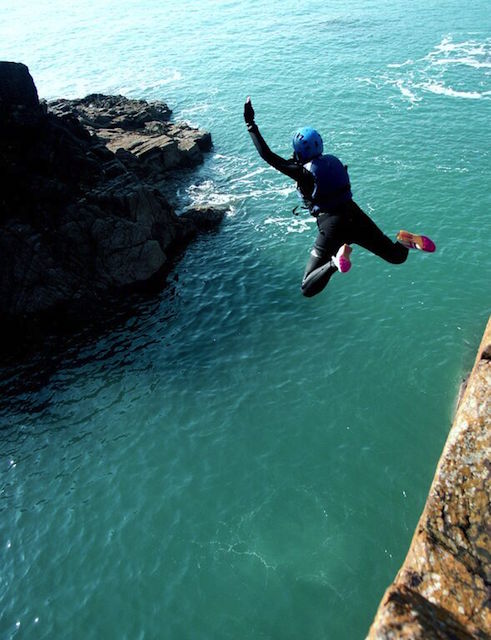 After entering the water I follow Rob, my guide, as we swim along the shore toward a stony outcropping I'm sure the sea will dash me against. But Rob knows how to time our arrival at the rocks' edge with the surge of the waves and tells me exactly where I should put my hands and feet to gain stability. Once up, we clamber about for a while at sea level, until Rob directs me once again into the water. 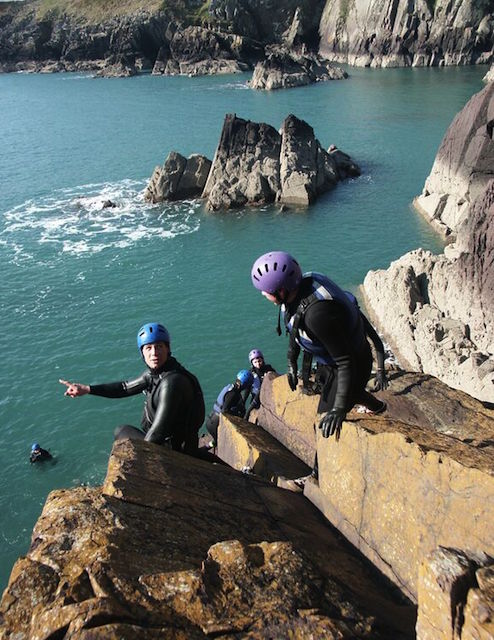 And so it goes. We creep along the shoreline for a while, often climbing higher, and then jump into the ocean. Sometimes the leaps are small, five feet or so, sometimes higher. I leap off a 30-foot-high cliff face, certain I'll smash myself against rocks lurking under the surface. Instead, I plummet with a great splash into the sea and rise to the surface with laughs and screams. As the morning ends, Rob suggests for a last adventure we explore a sea cave across the bay. By then I'm so exhausted he practically has to tow me there. 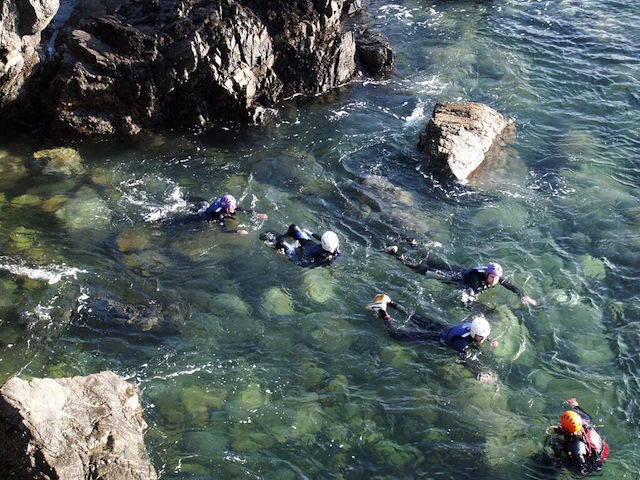 We inch our way through the dim grotto on our hands and knees, never completely out of the water's reach. Our pace isn't much slower than it's been all day; coasteering is not an activity of speed, but rather of endurance, peppered with grand surges of elation. That elation lingers, I discover afterward, sitting wrapped in a towel on the shore. Physically spent, I ponder a return to this lonely corner of the world. Getting to Pembrokeshire from New York requires a little work—your best bet is to hop a plane to London and then rent a car—but for thrill-seekers there's nowhere better.

Preseli Venture is located in the Pembrokeshire Coast National Park and surrounded immediately by little but nature at its wildest. There's an on-site lodge, which also serves meals. Glamp it up in Preseli's nifty geodesic dome.

To sample some local eats, Farmers Arms in the nearby village of Mathry serves homestyle lunch and dinner with staples such as beer battered cod and Pembrokeshire ham.

Make the most of the National Park and pay a visit to Melin Tregwynt, a mill where they've been weaving fine Welsh wools for more than a century. Located in the Park itself, pick up one of their blankets, bring a picnic, and head to the sea.

The coasteering experience was provided by Visit Wales.

Jill Gleeson is a travel and adventure journalist based in the Appalachians of Central Pennsylvania. Find her on Facebook and Twitter at @gopinkboots.

#coasteering
#gothamist getaways
#wales
#original
Do you know the scoop? Comment below or Send us a Tip