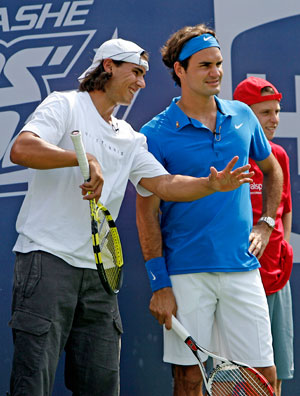 The best part about the end of summer? Maybe that's the U.S. Open, which starts Monday in Flushing. The tennis season's final Grand Slam provides the players with a grueling test to cap what feels like a condensed hard-court season.

Who can stop him this year? There's always world No. 2 Rafael Nadal, who owns a 8-5 record against Federer. Last year Nadal flamed out, apparently suffering from a tough summer on hard courts. This year, he comes in with nagging knee and wrist injuries, so a similar early exit could be in order, though his competitive will is as high as anyone's.

Federer could face his biggest threat in Novak Djokovic, the 20-year-old Serb who beat Andy Roddick, Nadal and Federer in succession to take the title in Montreal. Djokovic is in Nadal's half of the draw. Roddick, who lost to Federer in last year's final, would face the champ in the quarterfinals, part of a draw that probably proved less than thrilling to CBS. Roddick, the 2003 champion, says the atmosphere at night matches is, well, unmatched. If that Federer-Roddick quarter materializes, expect it to be a night match in Wednesday or Thursday of the second week. For those rooting for James Blake, the next time he shows up in a big match will be the first.

On the women's side, of Justine Henin, Jelena Jankovic, Ana Ivanovic, Serena Williams and Venus Williams, only one will reach the final. All of those contenders somehow made it to one side of the draw. Who stands to benefit from this the most? Defending champion Maria Sharapova. Her toughest tests will come from Nadia Petrova and Svetlana Kuznetsova. Sharapova has laid eggs in the Grand Slams this year though, so nothing is guaranteed.

Photo of Rafael Nadal and Roger Federer by AP/Jason DeCrow