The oldest drinkable wine in the world isn't found in France or Germany but in the labyrinthine wine cellar under an 18th century mansion built by a Caribbean pirate in the Bahamas. And if you ingratiate yourself with the staff of the Graycliff Hotel in Nassau, they'll escort you down there to cover it yourself: a 1727 Rudesheimer Apostelwein from Bremen Ratskeller in the "Rheinghau" region. It's a dessert wine, and it's yours to enjoy for $200,000. Like many things in the Bahamas, it's extravagantly expensive and is shipped in from somewhere else.

The original inhabitants of the island of New Providence—which is home to the capital city of Nassau—were the Lucayan, an indigenous tribe that was swiftly enslaved and exterminated by Columbus and his genocidal successors. Things were quiet there for a while (because nobody really knew how to exploit such a beautiful place) until the 17th and early 18th centuries when the Bahamas became a popular haven for pirates. Then the British took over with their stiff upper lips and enforced a sort of order, but the limestone soil was never much good for agriculture.

Loyalists from America withdrew there after the Revolutionary War, bringing their slaves from the colonies, and the vast majority of the islands' residents are descendants of slaves or free Africans. Britain abolished slavery in the Bahamas and throughout the empire in 1834, and the Bahamas remained a colony until 1973, when it became an independent member of the British Commonwealth. They're still loyal to the British crown, and the cultural residue of British colonialism can be seen in the plantation-style architecture and heard echoed in the accents. 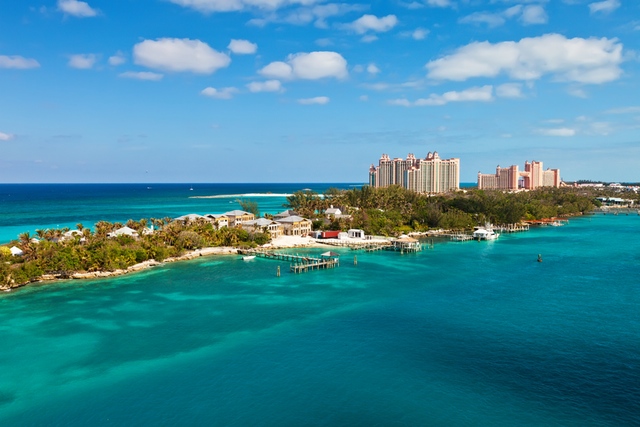 Paradise Island, with the Atlantis resort in the background. (Ruth Peterkin / Shutterstock)

Now the economy is mostly propped up by tourism. Nassau (and the adjacent Paradise Island) is only a two-and-a-half hour flight from NYC, making it an ideal tropical getaway for New Yorkers who want to quickly trade a polar vortex for a sparkling turquoise sea. Should you go, most of your time will be well-spent vegetating poolside or snorkeling off a white sand beach, where you can also rent a jet-ski for as little as ten bucks (at your own considerable risk) or buy a $20 "bottomless coconut" from local beach vendors who'll happily supply you with unlimited refills of their mysterious booze.

When you're ready for a break from all that, here are some other tips I gleaned from my recent trip which, full disclosure, was sponsored by the local tourist board, which is financed by the big resorts, which for some reason feel a need to promote a highly desirable tropical paradise.

Take a food walking tour: Alanna Rodgers is an energetic and garrulous 26-year-old who runs the outstanding Tru Bahamian Food Tours. Over the course of three hours, Rodgers or one of her erudite tour guides will escort you on an edifying and edible journey through some of the best non-touristy cuisine in Nassau. Rodgers, a native Bahamian, is a walking encyclopedia of the islands' history, and her tours are rich in fun detail. It's a fantastic way to learn about the Bahamas while tasting the local flavor.

Party at Junkanoo: On December 26th and New Year's Day the streets of Nassau are taken over by an exuberant costume party of epic proportions. Locals spend months designing and building the elaborate costumes for the traditional revelry, which dates back to the 17th century, when slaves were permitted one day to leave the plantation to celebrate with their families. These parties start late: dancers and musicians begin gathering around 11 p.m. and the rager doesn't wind down until the following afternoon.

Pig out at the Fish Fry: Located on Arawak Cay, the Fish Fry is a cluster of seafood shacks beloved by locals. Everyone debates which one is the best, but the most popular ones are Oh Andros, Twin Brothers, and Drifters. I ate at Twin Brothers, where I enjoyed the most succulent grouper of my life, as well as some exceptional cracked lobster (this is lobster dipped in a flour and egg wash, then fried). You must also try the cracked conch, as well as the delicious conch salad. Can never have too much conch! Enhance the tropical island mood with a Miami Vice (Pina Colada & Strawberry) or a Sky Juice, a coconut milk and gin concoction which, as my cab driver promised, "gets you so high." 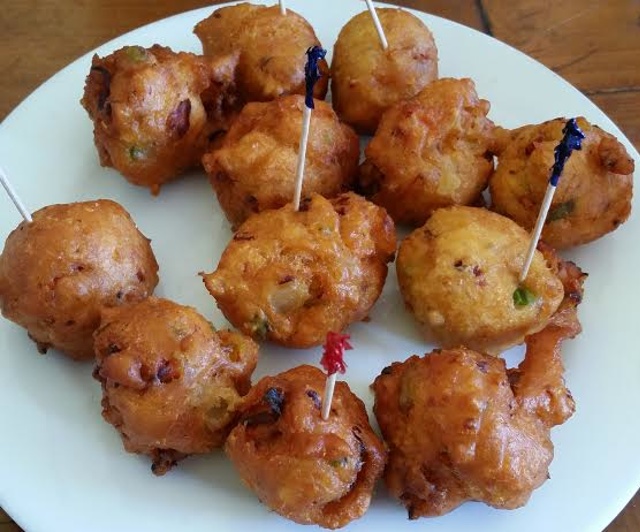 The cracked conch at Twin Brothers.

Visit The Heritage Museum of the Bahamas: Located in the creaky old Mountbatten House in Nassau, this new museum is overflowing with artifacts, art, and antiques that tell the story of the Bahamas from the first indigenous settlers to the present day. The museum takes an unflinching look at the history of slavery in the Bahamas, as well as piracy, colonialism, whaling, speed week, and the governorship of the Duke of Windsor, who moped around here during WWII, after abdicating the throne to be with American socialite Wallis Simpson. I'm told the larger Pompey Museum of Slavery and Emancipation in Nassau is also enlightening, but it was still being renovated when I was there.

Chocolate and Cigars at Graycliff: Across the street from the Heritage Museum is the Graycliff Hotel and Restaurant, housed in an 18th century mansion built by the pirate John Howard Graysmith. Stepping inside the old mansion feels like stepping back in time; the expansive lounge and restaurant are drenched in old world elegance. A piano player sings dulcet standards in one corner, while an old man rolls fresh cigars by the staircase. A seemingly endless interior courtyard winds through several distinct gardens and patios, and after wandering over a curved wooden bridge you'll finally arrive at a huge, immaculately tiled swimming pool. It's no dump. 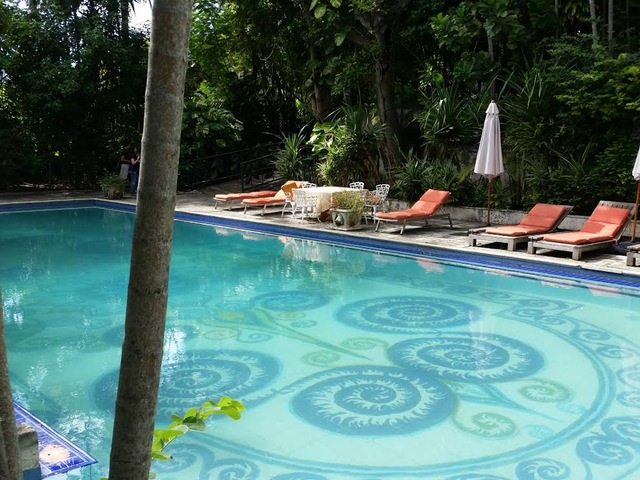 The pool at Graycliff in Nassau.

Above the pool, a patio is known for its Friday beer and pizza happy hours (three beers and a brick oven pizza for $20). Here you'll also find the Graycliff Cigar Company, which launched in the '70s under the direction of Fidel Castro’s personal cigar roller. Ambitious DIY cigar aficionados can take a personal cigar-rolling lesson, others can simply hang out to enjoy a stogie and adult beverage, or buy a box to bring home. Downstairs there's the Graycliff Chocolatier, which makes a wide variety of exceptional chocolates, truffles, and bonbons on premises.

And there's the aforementioned wine cellar, which boasts over 275,000 bottles. It's not always possible to tour it, because there's a private dining room down there that's sometimes in use (my visit was rushed because a Saudi prince was expected imminently), but it's something you should see if you're at all interested in wine. And if you can't afford that $200,000 Rudesheimer, you'll find a more affordable jeroboam of Cristal down there for just $28,000.

Where to Stay: Finally, here are your current lodging options around Nassau and Paradise Island (a massive new luxury resort called Baha Mar is currently under construction and will open in 2015). Three of the most popular resorts, in descending order of luxuriance, are the One&Only Ocean Club, The Cove at Atlantis, and the Sandals Royal Bahamian. Some notes on each:

The One&Only: Very elegant, but not in a flashy way. It's just extremely nice. I took a tour of the property during my trip and left wondering why I don't just dedicate my life to making more money so I can afford to stay at places this fine. It's about a 20 minute walk along the beach to the big Atlantis resort, but feels like a world away. Built out of Huntington Hartford's old beachfront getaway, the lush grounds feature extensive gardens, hammocks, tennis courts, a swimming pool and an exceptional open-air Jean-Georges restaurant called Dune. The whole place is sublime and very relaxing and will probably ruin your life.

Sandals: No kids are allowed at this all-inclusive resort on Nassau's Cable Beach; it's a place for couples who seem intent on sucking the most marrow out of that all-inclusive bone. Located on the site of a 1940s resort called The Balmoral Club, it's certainly a pretty spot, despite the ubiquitous giant neon signs constantly reminding you that you are at Sandals wooooo! Some of the decor skews cheesy, but the clientele doesn't seem to mind, and the experience is greatly enhanced by the numerous swim-up bars. Which, again: all-inclusive. At night there are numerous fire pits to gather around, a piano bar with well-lubricated sing-a-long sessions, and other boisterous entertainments. I crossed paths in the hot tub with plenty of gregarious drinkers who'd flown in from all over middle America, so if you're a "people person" who wants to party with your significant other in a social setting, you'll fit right in here. (I wouldn't recommend going alone, it really is all couples.)

My favorite part of the resort (which, by the way, has over 400 rooms and ten restaurants) was the little speck of an island just a ten minute ferry ride from the hotels. There's more of a Zen vibe there, and you can get a massage, zone out on the beach or get ripped at the swim-up bar, where you should order Jose's Hammer, a potent drink made by the eponymous bartender who zealously guards the recipe. Don't overthink it. Which should perhaps be Sandals' motto.

The Cove at Atlantis: The place to be, in my opinion. The Cove is part of the sprawling two-mile Atlantis resort, which, judging by the commercials I've seen at the gym, seems pretty over the top. And it is. The heart of the resort is a stupidly fun water park which boasts two slides that pass through a giant shark tank, as well as a gurgling man-made river with rapids that propel you through the grounds, which are lush and feel a little unreal, like Munchkinland on the beach, with bars. 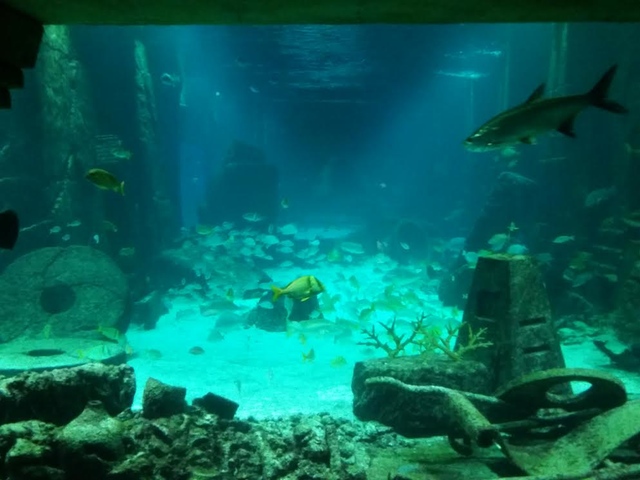 The aquarium at Atlantis are off the chain.

The main hotel complex at Atlantis is very Vegas, with a Nobu and a Todd English restaurant tucked into a raucous casino decked out with opulent Dale Chihuly glass art. Kids who wander here are forced to stay on a path painted onto the carpet, and security, to their credit, is very vigilant about keeping them in their ghetto. (They have their own ridiculous kids' gaming room a few steps away.) Just next to the casino you'll find one of two astonishing aquariums, where a seemingly endless variety of marine life swirls around you. I had some deep thoughts here while I was hypnotized by the jellyfish.

The Cove is the more adult-oriented hotel set off to the side, and it's a stunner, with its own beach and an adults-only pool that's more of a club scene for my taste but whatever. The rooms are not cheap, but prices seem to fluctuate wildly (I saw some available online in the $400 range, but the night I stayed my room was renting for $700). Each of the basic rooms is a huge suite with a sunken living room, a balcony, and a bathroom bigger than my kitchen. If you have the money, I recommend it, especially if I can come too.

#bahamas
#gothamist getaways
#travel
#original
Do you know the scoop? Comment below or Send us a Tip