Things I Learned After Getting Robbed In Nicaragua

In March, I took a vacation to Nicaragua. The low cost of a plane ticket combined with its exoticism—volcanoes shrouded in cloud forests, miles of stunning, turquoise beaches and a tumultuous, fascinating history—made it an ideal getaway from which to escape the frigid, interminable bear hug that is New York in the winter.

Up until this point I'd considered myself a fairly seasoned traveler—not expert, by any stretch, but adept enough that I packed hastily, possibly drunkenly, the night before my departure, tossing into my carry-on all the flowing summer dresses and bathing suits I could fit before snapping the thing shut and going to sleep. Slapdash packing had never failed me in the past—why would it now? In retrospect, it was probably precisely this flip attitude that got me in trouble. 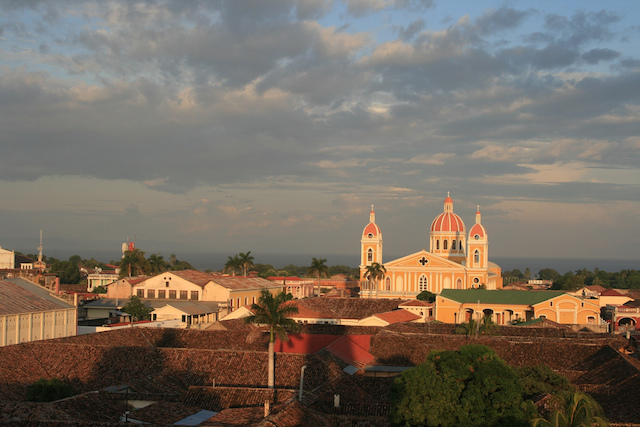 On my second day in the country I made my way to Granada, a charming if not somewhat tourist-laden town distinct for its cobbled streets, lively squares and vibrant Spanish-Colonial architecture. It was around 7 p.m., and my travel companion Tess and I had just finished dinner, with the plan now to head back to our hostel to slap some water on our sweaty faces before going back out. My purse was a shoulder bag with a relatively thin leather strap, a thought that briefly occurred to me before I dashed out the door for the airport two mornings before. "Someone could cut this but why would anyone ever?" was the distinct but hurried thought that rushed through the backdrop of my mind, a subtle news ticker of reason buried beneath the bluster of my excitement.

We'd paused briefly in the street to chat with some people we recognized from the bus ride into town, and moments after turning away from them, I felt a sharp tug on my bag. My instinct was to assume it was one of our new friends, viciously screwing with me, but I realized quickly I was wrong—the tug came from a man sitting backwards on a motorcycle, straddling it as another man drove.

Fear and general confusion muddled my memory of the moments that followed, but I do know this: The bag somehow made it off my body, though I was somehow able to catch the strap as it streamed away. I pulled back with all my strength, hoping my assailant would tumble from the bike so I could kick him until he apologized and promised never to rob anyone ever again. (In the days that followed I crafted several variations of this revenge fantasy; I will spare you the others.)

Alas, it didn't take long for the strap to snap in my hand, sending me skidding across the ground. The motorcycle men drove off into the night, having claimed my bag and everything in it, while I still clung to the worthless, too-thin strap, blood seeping from my knees and pooling between the charming cobblestones.

Always wear a shoulder bag, and make sure the straps are thick.
A purse can be slipped easily off your arm, but a shoulder bag will take some effort. Get one with straps thick enough that they can't be slashed, or, god forbid, broken. I knew better and I did it anyway.

Leave your passport at home, or put it in a moneybelt.
The first conscious thought I had after the men drove off was: "They got my passport." The second I had was: "No they didn't." The hostel we were staying at was far from luxurious—concrete walls, no hot water, and a window opening to a semi-public courtyard that...wouldn't latch. It was hardly a safe bet, but it's much less likely that someone will break into your room and riffle through your shit than that you'll get robbed on the street.

Alternatively, put it in a moneybelt. It's not foolproof—I know people who have been frisked by criminals, and it's the first thing they find—but for chrissakes, it's better there than in your purse.

Make copies of your passport, and keep them separate from your actual passport.
If you lose your passport, replacing it is going to suck. Having a copy on hand will make it suck a lot less, since it will at least help enable you to prove your identity to the U.S. government.

Wear a watch
Hey, you know what you use your phone for way more often than you think you do? Checking the time. And rarely do you need to know the time so badly as when you're traveling: You have people to meet, buses to catch, shit to do. The most irritating thing was not my inability to check Twitter whenever I wanted, it was that I had to ask the god damn time whenever I wanted to know it. You would be amazed at just how badly you want to know the time when you know you can't.

Separate your money.
All the cash I had was in my purse. (Joke's on you, thieves! I was only carrying around 20 bucks. Though of course all my credit cards were in there, too.) You want to make sure that whatever happens, you've got back-up money. I was lucky enough to be traveling with a good friend who covered me for the rest of the trip, but this was the best case scenario: Had I been alone, I would probably have resigned myself to a life living under a charming Granada park bench for the rest of my life.

Kill your Phone.
The first thing to do is cancel your credit cards. The next thing to do is remote detonate your iPhone using the eminently handy "Lost Mode." Even if you find it, what are you going to do, organize a prison break? Just forget it. Kill the phone, so no one can ever access the deepest, darkest recesses of your personal and monetary life you've undoubtedly stored on the Cloud.

Get phone insurance.
As a person not prone to drunkenly plopping their iProducts in the toilet, I never thought I'd need phone insurance. But do you have any idea how much those things cost? Maybe you do, but I sure as fuck did not. Spoiler: I spent more money replacing my phone than I did the entire eight days I was in Nicaragua.

Try not to let getting robbed ruin your trip.
Getting robbed was a horror show, made worse because so much could have been prevented. (See above.) But aside from some nasty road rash and some minor PTSD, I was largely unharmed, and still managed to have a good time: I hiked a beautiful volcano in Ometepe, I surfed in San Juan del Sur, I slugged Flor de Caña rum at roadside stands. By the time I flew back to New York, I'd racked up enough happy memories that they almost blotted out the bad. Almost.

#gothamist getaways
#nicaragua
#travel
#original
Do you know the scoop? Comment below or Send us a Tip