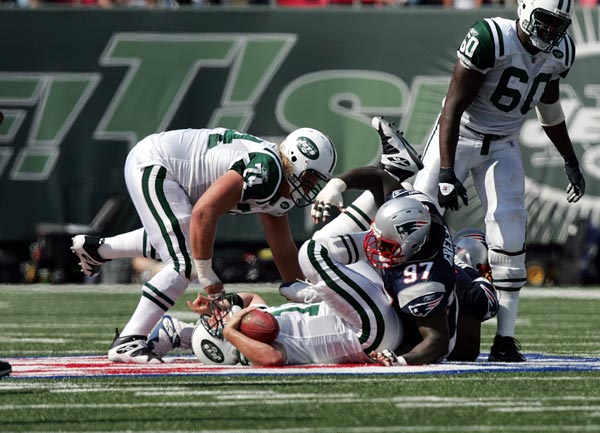 For much of the first half, things didn't look so bad. The Jets contained the Patriots offense, had scored a touchdown of their own and looked like they would be in position to scare and maybe upset New England. But seconds into the second half, the team trailed by two touchdowns en route to a 38-14 loss at home. Adding injury to insult, the Jets lost Chad Pennington to an ankle injury. He returned but then yielded to Kellen Clemens during garbage time. The injury was especially ugly. Not only did Pennington have to endure landing awkwardly on his own foot, but he had to hear -- as he hustled hobbled off the field to save a time out -- fans cheer Clemens' entrance into the game. Not the classiest move by Jets fans.

Make no mistake, New England has a good team. Randy Moss' 51-yard touchdown won't be the first time he beats triple coverage this season. But the Jets could have limited their mistakes. Ellis Hobbs is fast. He still shouldn't have been able to run back a kick 108 yards to start the second period. The Jets didn't tackle too well on that Wes Welker touchdown either. After the season they had last year, the Jets won't and shouldn't be satisfied with this effort against anyone, even if the opposition is among the league's elite. Coach Eric Mangini is capable of making adjustments, and he will.