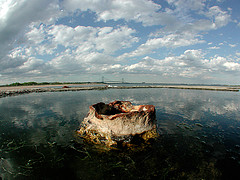 Staten Island needs some cheerleaders every once in a while, especially after their ice cream flavor was named after their landfill. The NY Times has a piece on the borough's historian, "Brooklyn has Walt Whitman to sing praises of its 'ample hills.' Manhattan has Woody Allen to capture its outsize style and neuroses. And Staten Island? Well, Staten Island has Thomas W. Matteo for a borough historian to chronicle its glories, its goofs and, yes, its landfill."

Matteo is the 4th historian of Staten Island, and he knows it isn't the heart of New York, nor is it necessarily a vital organ that keeps the city going...but he hopes some history lessons, and the nice view, will prove intriguing to some.

Standing at Fort Wadsworth on Staten Island, where George Washington set up a lookout in 1776, and soldiers in 1812 draped chains across the Narrows to stop British ships, he stretches out his arms and says, “Look at this view.” Across New York Harbor, Manhattan rises in a haze, like the Emerald City, except in washed-out blues and grays. New Jersey is to the left and Brooklyn to the right, linked by the soaring Verrazano Bridge. Sailboats, tugs, tankers and motor boats dot the panorama.

Amongst its trash are some historic treasures, like the Victorian Gothic house of Alice Austen, "a pioneering photographer who spent most of her 70s and 80s in the borough’s poorhouse before her work was rediscovered in 1948." Trying to hit a pop culture nerve, Matteo explains that more recent celebrities from the island are Christina Aguilera, Steven Seagal and Paul Newman. Of course, some of his highlights (Steven Seagal?!) are questionable, and he mentions "Ulysses S. Grant almost lived here, but his wife thought there were too many mosquitoes when they visited one unusually hot summer." Not exactly something you'd put on a plaque.

All of the tidbits he's been accumulating about the borough will be compiled for a book due out this fall, called “Staten Island: I Didn’t Know That!” He also plans to start an oral history project and is campaigning to have Staten Island history added to the public school curriculum. Keep up to date with the historian over at his website, www.StatenIslandHistorian.com.

Need a reason to check the island out for yourself? Head over for one of Film Fest Guy's many events. Tonight he's screening the documentary about a New Yorker trying out arranged marriage, in Made in India (trailer here).