The New Domino Would Mean Many Tall Buildings 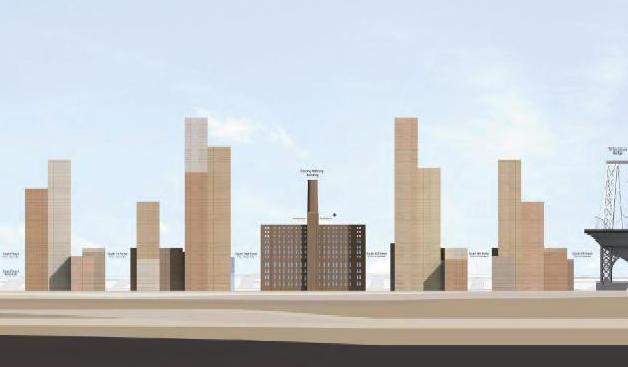 It's one thing to read that developers who have the Domino Sugar Factory property in Brooklyn want to build 2,200 apartments. It's another thing to actually see renderings of what that could look like. The city's Department of Planning put a draft Scope of Work for the project online, in anticipation of public scoping meeting on July 31, 2007 from 2:00 PM to 5:00 PM and from 6:00 PM to 8:45 PM.

Curbed sifted through the document and notes that while the Processing House (the building in the center of the above rendering) would pretty much stay, especially since it will probably be designated a landmark, it's unclear what the fate will be for other buildings or the Domino Sugar sign. Additionally, straight from the Scope of Work:

If approved, the proposed actions would allow for the construction of up to 9 new residential structures along four of the waterfront blocks between Grand Avenue and South 5th Street and up to 6 new residential structures on the upland block east of Kent Avenue between South 3rd and South 4th Streets. The buildings along Kent Avenue would range in height from approximately 50 to 100 feet. Two of the buildings along the waterfront would reach heights of 300 feet and two would reach 400 feet. The buildings on the upland portion of the site east of Kent Avenue would rise to a maximum height of 90 feet along Kent Avenue and 140 feet elsewhere on the lot.

The Waterfront Preservation Alliance mapped out the Domino site and explains the dynamic of the existing buildings.