The Giants Get A Big Win In Washington 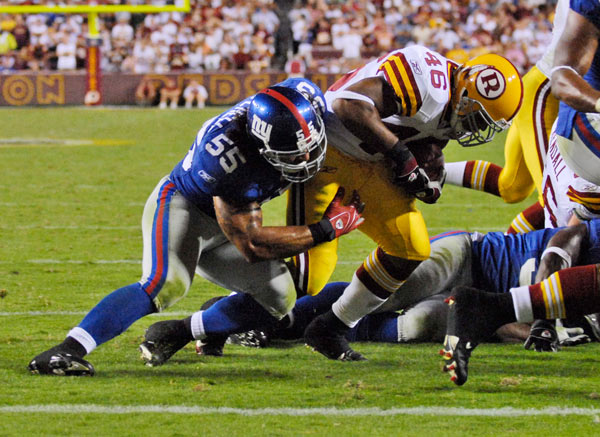 Hold the casket, cancel the flowers, the Giants aren’t dead yet. Faced with a 17-3 halftime deficit, the Giants showed a lot of heart and some very good defense for a change as they rallied to win 24-17.

And it really was the defense that led the way. Washington only managed 83 yards of offense in the second half, and the New York defense made stops when it mattered, none more so than the final drive. After a great punt return, Washington had the ball on the New York 35 with just over two minutes remaining. Three pass plays brought them to the one-yard line with just under a minute and no timeouts. After a clock-stopping spike and an incomplete pass, Ladell Betts tried to run left two times and was stuffed, giving New York the win.

Now, the Giants can prepare for the Eagles and we can try and figure out just what this team is. Their first two opponents, Dallas and Green Bay are both 3-0, which could indicate that New York has faced tougher competition than we originally thought. On the other hand, the pass defense still has to show it can defend against a good quarterback and with Donovan McNabb coming off a 381-yard/4 TD day, it will get that chance Sunday Night.