The Games of Our Youth (Yo-Yo and RPS), Today 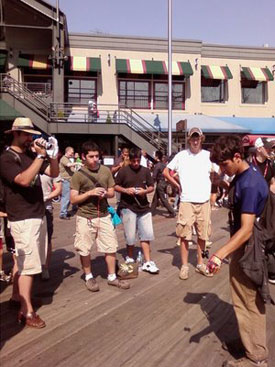 Did you excel at yo-yo and rock, scissor, paper as a kid? Well, this past weekend was the 1st ever New York State Yo-Yo Contest at the South Street Seaport. From what we hear, excelling in yo-yo is the way to get all the ladies (they dig the finger dexterity and creativity with the yo-yo). It's not just the kids that are throwing the yo-yo around either. Downtown Express tells us that Riad Nasr, the executive chef at Balthazar is also a yo-yo fanatic. "I have a yo-yo in my pocket on the line. In between pick-ups, I’ll throw a trick or two." Watch out for that DOH inspection, Riad.

Geekanerd comes through with some great video footage along with some photos of Saturday's yo-yo contest. An aside - do you remember when illegal subway vendors would sell yo-yos and not DVDs or batteries?

If the yo-yo wasn't your thing as a kid, there's always rock, paper, scissor, right? The Brooklyn Cyclones are having a "Rock, Paper, Scissors" tournament at Keyspan Park on Saturday, September 1st. There will be four qualifying brackets with a double-elimination, best-of-three series, with winners advancing to the Final Four. Those in the Final Four will compete during the Cyclones-S.I. Yankees game that evening. What does the winner get? A pair of 2008 Cyclones Season Tickets and a pair of round-trip domestic tickets on Jet Blue. To register, contact Rebecca Schwartz at 718-449-8497 or rebecca@brooklyncyclones.com before August 24th. There is a $15 registration fee, which includes a ticket to the September 1st game against the Yankees, and an event t-shirt.

If you participate in the Cyclones promotion, be sure to check out these RPS strategies.