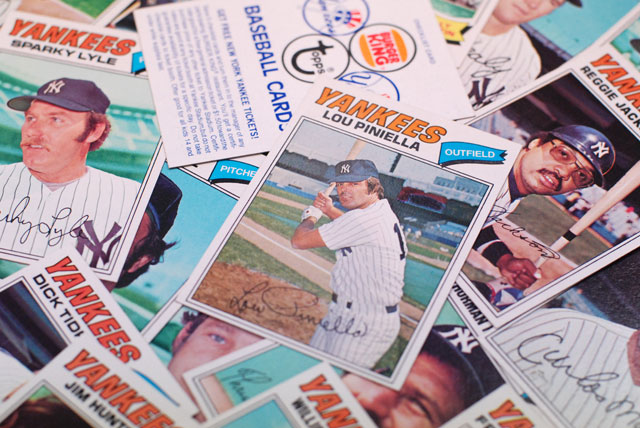 The 1977 Yankee season has been not only written about, but also had an ESPN mini-series made about it. Many of its stories are well known, but there is a strange tale from the season that few know about. Well, unless you collected baseball cards.

In 1977, Burger King restaurants in the Tri-State area issued a set of twenty-two New York Yankees baseball cards plus a checklist card, free with the purchase of selected menu items, if you were a kid 14 or under. If kids collected five of the cards, they got a voucher for a free general admission Yankee ticket or $1.50 off any other ticket. 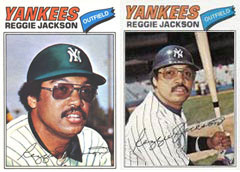 The set was printed by Topps, then headquartered on 36th Street in Sunset Park, a few blocks from the Green-Wood Cemetery. In a cost savings move, they produced a set for Burger King that was identical to their regular baseball card issue of the year.

Most of the Burger King cards ended up using the same photos, with slightly different cropping. Some reflected Yankees additions--most notably Reggie Jackson’s card of him in an air-brushed Yankees uniform was replaced with an actual photo of him as a Bomber. Plus, it has the only card of Mike Torrez as in a Yankee uniform (albeit a poorly airbrushed one). None of the cards, save for the checklist, had a Burger King logo.

While dedicated baseball card collectors probably know about this set, there's something special: The twenty-two card set had a twenty-third card. And how is that possible?

A pissed off George Steinbrenner (natch)!

The Boss was livid when his favorite player, Lou Piniella, was omitted from the set. Sparky Lyle's insider view of the trouble filled 1978 Yankees season, The Bronx Zoo, relates the origins of the twenty-third card:

George loves Lou and hates it when he doesn't play. Lou is also George's son's idol. Last year when Burger King put out a set of baseball cards with the pictures of the Yankee players on them, they forgot to include Piniella, and George called them up, reamed their ass, and made them print a special Piniella card to add to the set.

So after the promotion had started, card #23 Lou Piniella, was printed and distributed. One little catch, though. It wasn't printed in the same amount as the others and wound up being a bit of a rarity.

Today you can easily find the twenty-two card set for around $10 or so. Not bad for a set containing the likes of Thurman Munson, Reggie Jackson, Catfish Hunter, and Willie Randolph. The Piniella card, well good luck finding one. Since it is a doppelganger for the regular 1977 Topps card (#96), you may find one going through a stack of them or popping up on eBay.

The Tri-State Area Burger Kings did issue sets the next two years. All had twenty-two cards plus a checklist and of course a Lou Piniella card.