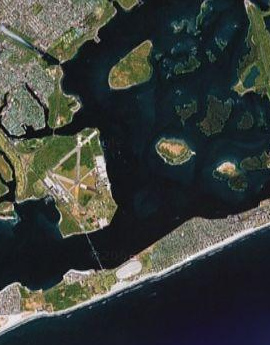 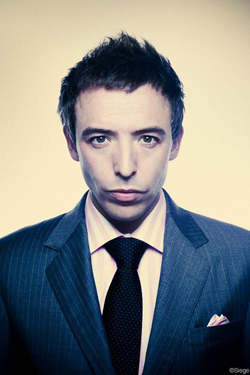 Grant Stoddard (pictured) saw little islands (also pictured) as his plane flew above New York, and from that a seed was planted for possibly the craziest idea we've heard, well, this week: he wanted to live on one of these islands for a few days to, you know, test his wilderness survival skills while still having a clear view of the Empire State Building. After running the idea by a friend, Duke (who coincidentally spent a night on each of these islands), he's off.

Mulling over my options, he suggests Ruffle Bar, a 143-acre sandbar in Jamaica Bay that had been an oyster outpost until the mid-twentieth century. The last known resident, a subsistence fisherman, left around 1944. Duke seems sure that I could live off the land, too, as fish and seafood abound in the surrounding waters. He then very kindly offers to row me to the island. Within 48 hours we are launching from Floyd Bennett Field and heading across the bay. To make it “real,” I’m marooning myself with only the bare minimum: little more than the clothes on my back, a knife, a tarp, and some matches.

Upon reaching his island's shore he quickly spots birds’ eggs, mussels, edible seaweed and...coconuts? At this point we expect to read that Lost has changed their shooting location from Hawaii to "Ruffle Bar," but that isn't the case. It's a mystery as to how they got there, but likely they washed up along with the living room furniture, pots, pans and trash that he finds.

Along with an inventory of the food available, a map is created in Stoddard's mind, and he names each area of the island according to its characteristics: "Goose Crap Bay, Stinky Harbor, Nonbiodegradable Heights...", as he takes a 45-minute walk around his new temporary home. Soon enough, however, Stoddard loses hope as the rains come down and "a mental image of Duke scouring Ruffle Bar two days hence and eventually coming across my uncallused hand protruding from the mud at low tide" is in his head. One S.O.S. call and he's outta there, but the NYMag article he wrote chronicling his adventure has future reality show written all over it.

UPDATE: From a commenter, listen to the This American Life episode called "In the Shadow of the City," here. It chronicles a real shipwreck adventure involving Ruffle Bar.