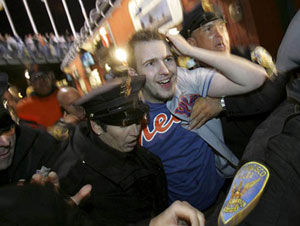 While Matt Murphy claimed that he was going to keep it if possible, does it surprise anyone that the ball from Barry Bonds' 756th home run is going on sale? The 21 year-old Murphy, a Queens resident and Mets fan, caught the record-breaking ball earlier this month in San Francisco (while on the way to Australia), says that he's selling the ball for tax purposes. "It wasn't hard. It was simple math. I'm upset by the decision I had to make. I wanted to keep it. I'm young. I don't have the bank account. ... It would have cost me a lot more to keep it."

Murphy, who wants to attend business school in NYC, hopes that whomever buys the ball will put it on loan to the Baseball Hall of Fame, "I really hope the person who does buy it is in position to loan it." He also plans to share some of the proceeds from the sale with the friend he was traveling with and attended the game with.