You may have the option to visit Austin (again) during the non-SXSW off-season. But wouldn't it be much more imaginative to go to the middle of Wisconsin and spend a few days in an actual Frank Lloyd Wright-designed cottage? Well, you can do that at the Seth Peterson Cottage in Mirror Lake State Park. And, until the Guggenheim offers sleepovers, there are actually a number of Wright properties across the country where you experience living in a Wright home.

The Louis Penfield House in Willioughby Hills, Ohio, outside of Cleveland, was built in 1955 after Penfield asked Wright to build a house to suit his 6-foot, 8-inch frame. At the time, Wright was building his "Usonian" (read: affordable and attractive) homes. According to Ohio Magazine, "Penfield knew [his height] might pique the interest of the diminutive architect who was famous for building low-to-the-ground housing. Wright took the challenge."

The long and narrow house (floorplan) has three bedrooms and a huge terrace. It was painstakingly restored by Penfield's son, who wrote about it for This Old House and who turned into a vacation rental property. The house is for sale for $1.7 million, but will be rented until it is sold.

The bucolic Wisconsin home is only 880 square feet, but it boasts some gorgeous views of Mirror State Park. Seth Peterson had commissioned Wright to build the home, but Peterson died before seeing it completed, as did Wright in 1959. The home was purchased by the state of Wisconsin in 1966 and was restored in 1989. Furniture has been steadily restored over the years.

The living room at the Seth Peterson Cottage 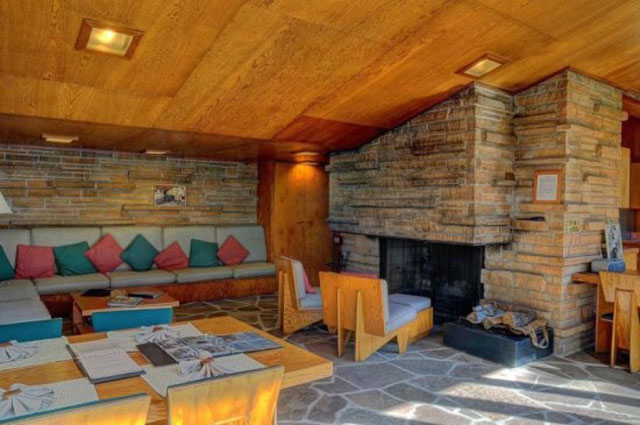 The living room at the Seth Peterson Cottage

Rates are $300/night (minimum two night stay) for the one-bedroom, one-bath cottage, which has a huge stone hearth at the center and a big terrace overlooking the lake. A dock was built and a canoe was donated, to add to guests' enjoyment.

There's no shortage of Frank Lloyd Wright history in Chicago, what with his home and studio in Oak Park, but the Emil Bach House is special. The 1915 home is part of Wright's Prairie style, based on the Arts and Crafts movement. The home's exterior has undergone some changes, but overall, the design is the same.

A block from Lake Michigan, there are two bedrooms available for guests and the nightly fees range from $700-995, depending on time of year. There's WiFi, flat screen TVs, bathrobes and botanical soap. It's also available for meetings, what with its lovely garden.

In 1938, Life magazine asked architects to design a "dream houses" for modern American families with incomes from $2,000 to $10,000. Frank Lloyd Wright designed a "Usonian" home for a family at the $6,000 income range, but that family was unable to build it. Enter Bernard and Fern Schwartz, who eagerly offered Wright the chance to build it for them on their Two Rivers, Wisconsin property, located 90 miles from Milwaukee.

Known as Still Bend, the four-bedroom, two-and-a-half bath house—which has one of the oldest radiant floor heating systems— can be rented for between $295 and $425 a night, depending on the time of year. It's also available for small weddings.

In Pennsylvania, near Wright's masterpiece, Fallingwater, are the Usonian homes, dubbed Polymath Park. One of them is Wright's Duncan House (the other three are homes by Wright disciples). The home was originally built in 1957 in Lisle, Illinois but it was dismantled and re-constructed in Pennsylvania.

The home rents for $299-399, depending on day of the week (the rate is for three guests; additional guests are another $50 each per night). Also, "Due to the historical and architechtual nature of the home, we do not allow use of the fireplace or stove top. We do however, provide a microwave, toaster oven, and coffee pot. The Duncan House has 3 bedrooms. There is one King size bed, two single beds (in one bedroom) and one queen size bed. It also has two bathrooms."

In 1952, Wright designed this home for University of Michigan economics professor William Palmer. Located in Ann Arbor, the three-bedroom house has "triangular architecture, origami furniture and window views of the forest landscape outside" plus the original Wright-designed furniture and a stunning tea house.

Wright never ventured to Austin, Minnesota, but his design for the Elam House was completed in 1951. According to the home's website, "S.P. 'Pearl' Elam and his wife toured Taliesin East in 1948 and mentioned to John Howe (Wright’s Chief Draftsman) that they were interested in building a home," and that's all it took to get a meeting with Wright.

Elam House has six bedrooms and five baths (floorplan), and the 820 square foot "Terrace Suite," complete with bedroom, bath, living room and kitchen, is available for rent. Guests also have access to the rest of the house during one specified hour each day. Rates range from $225 to $250 a night depending on the season.

Jen Chung is executive editor of Gothamist.com and co-founder of Gothamist LLC. Back in the 1980s, a local NJ newspaper asked residents what historical figure they most wanted to be; while some people answered George Washington or Amelia Earhart, a 12-year-old Jen said, "Frank Lloyd Wright."

#frank lloyd wright
#Frank Lloyd Wright homes
#gothamist getaways
#original
Do you know the scoop? Comment below or Send us a Tip