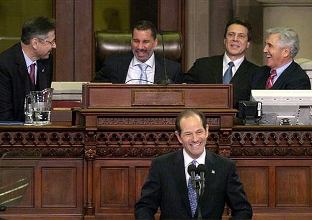 Governor Eliot Spitzer think the State Senate's idea to have Attorney General Andrew Cuomo appointed "special prosecutor" - to investigate misdeeds in Spitzer's office - is "pointless." Spitzer told the Sun, "It seems to me that the attorney general already issued a report that he called complete, and Joe Bruno already called it a complete report. We have the Ethics Commission doing its thing."

Um, State Senate majority leader Bruno actually wants Cuomo to be a special prosecutor, which is why State Senate Republicans are moving forward to conduct its own investigation into the matter! But it's good for the drama: Republican State Senator George Winner has a press conference demanding Cuomo be made special prosecutor, ten minutes later Spitzer's office says no, then Winner says, "The governor is not exactly being transparent in the effort to get to truth, justice and the American way."

Other politicians have weighed in. Assembly Leader Sheldon Silver thinks Spitzer now knows he's been too combative, hindering the political process (love how Silver talks about cooperation). And former governor Mario Cuomo says that Spitzer has to testify under oath so this matter can be put to rest. The senior Cuomo also expressed surprise at the dirty tricks plotting, "Why did they even start thinking about [allegedly siccing the State Police on Bruno]? It was all so naive."

Know who else wants a probe of Spitzer? Former mayor Giuliani! At a campaign stop in New Hampshire, Rudy said, "We don't know exactly who did that, who ordered it. I don't think it's fair to lay it at the governor's feet until you look at it. Maybe it will turn out that the governor didn't know about it. That doubt should be removed."

Spitzer wrote an apology for the NY Times' editorial section on Sunday - he apologized and wants New Yorkers not to get bogged down in this. Too late!