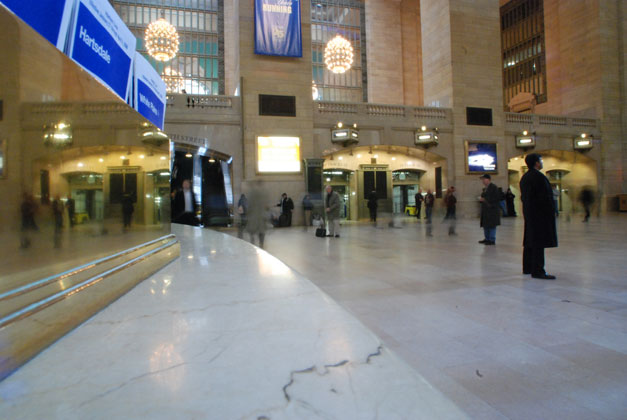 If you are one of the 700,000 people who pass through Grand Central Terminal every day there are things that you may take for granted or just may not know about the great train station. Thanks to Metro-North's Dan Brucker, Gothamist can reveal some of them to you.

First things first: It is Grand Central Terminal, not Grand Central Station, since it has always been the terminus for the railroads it serves since its 1903 opening. The “central” part of the name has nothing to do with its location - it's because it was built by the New York Central Railroad.

The terminal wasn’t always a beloved landmark, since it was once filled with billboards and grime. There were several schemes to tear it down and replace it with an office tower, the first dating back to 1954 - ten years before Penn Station met that fate. In 1968, there was another plan by the Penn Central (New York Central's successor) railroad to do the same thing. That was stopped thanks to the efforts of the New York City Landmarks Preservation Commission and citizens, including Jacqueline Kennedy Onassis (who has a plaque commemorating her efforts in Vanderbilt Hall), who fought it all the way to the Supreme Court.

The building’s exterior was landmarked in 1967 and parts of the interior in 1980. It took the MTA until 1994 to get effective control of the building, getting a 110-year lease from the successor company to the Penn Central, allowing for major rehab and renovations. 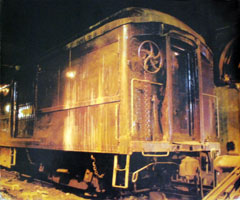 There are many things you can’t see in the Terminal, since they are either behind closed doors or in otherwise off limits areas of the vast complex which stretches uptown all the way to 50th Street. In one part of the vast underground labyrinth, sitting under the Waldorf-Astoria hotel for decade, there's a special train car and station built for Franklin Delano Roosevelt that allowed him to enter the hotel while sitting in his car in order to hide his disability.

Back in the part of the Terminal you can actually see is the Metro-North Lost & Found Room on the Lower Level. It is one of the most successful lost & founds rooms anywhere with an 80% overall recovery rate and a 100% recovery rate for laptop computers. Every item has handwritten tags stating the time and location the item was found. All the data is entered into a database that riders can check via the Metro-North website to see if a lost item is turned in. Don’t think of “shopping” at the Lost & Found, since you’ll be asked for details on where you lost the item! 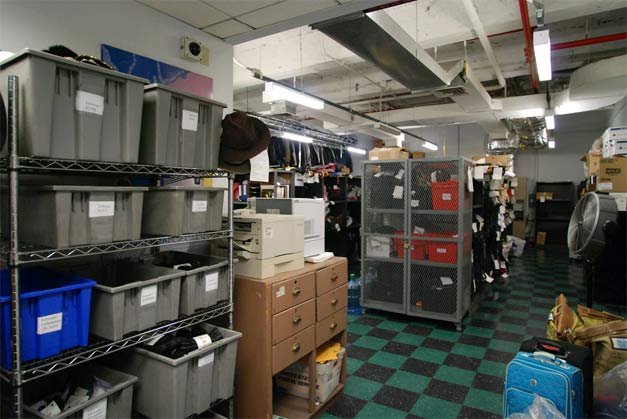 On the upper floors of the Terminal, Metro-North can control its entire railroad with a couple of mouse clicks by “Rail Traffic Controllers” from its Operations Control Center. It's completely computerized and someone sitting in Midtown Manhattan can do something as simple as throw a switch in Connecticut or see the entire status of the railroad on a big schematic board. It's the Metro-North’s “War Room”, where the leaders of the railroad go when there is any sort of crisis, be it blackout or snowstorm, to see how they can keep the trains running.

Some things are hidden in plain sight in the Terminal. One is probably one of the biggest mistakes ever - the impressive mural of the October zodiac in the Main Concourse was painted on the ceiling backwards. First noticed shortly after the Terminal opened in 1913 by an astute commuter from New Rochelle, the New York Central just claimed it was the view from the heavens, so they didn’t have to redo the ceiling. The great mistake was never corrected, even after the MTA cleaned decades of tar from cigarettes of the ceiling and restored it. The MTA also didn’t fix the small hole in the ceiling caused by the display of a Redstone rocket in 1957 which someone forgot to see if it would fit in the building. 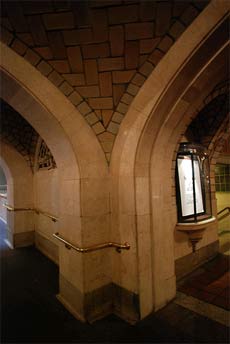 Another hidden-in-plain-sight object is something worth anywhere from $10 to $20 million dollars: It's the clock atop the famous information booth in the center of the Main Concourse. The clock’s faces are made from opal.

There's also a secret communications system in the Terminal in front of the Oyster Bar on the lower level ramp. The Guastavino tile archway (pictured, right) is actually a whispering gallery: Just stand in one corner and talk, while the person in the opposite corner can hear you perfectly.

Back to the Main Concourse: The East Staircase was not always there, but it was always in the original plans. Taken from the same stone as the original (the quarry in Tennessee was found and reopened just for the Terminal’s renovation), the stairs are a mirror image of the ones opposite it.

Well, almost a mirror image. There is one small detail that they changed - the steps are one inch smaller than their counterpart, so in the future whoever finds the remnants of the Terminal can figure out they weren’t built at the same time. Unless, that's just an explanation along the lines of “view from the heavens.”