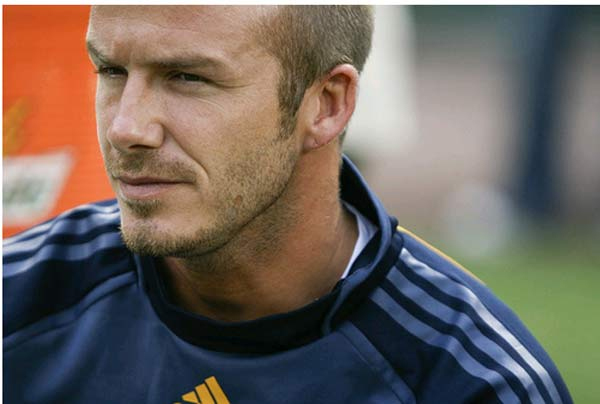 British tabloid mainstay, fashion icon, and fabled footballer David Beckham will make his first appearance in New York City today since the former captain of England's national team started playing with the Los Angeles Galaxy. He is spending the afternoon in Harlem coaching the 33 teenage members of the FC Harlem Lions, intending to highlight the need for more soccer fields in the neighborhood.

Tomorrow the captain of the Galaxy will take the field along with his teammates to face the New York Red Bulls at Giants Stadium in New Jersey. Dan Courtemanche, the spokesman for Major League Soccer, noted that "What Mr. Beckham does tonight is up to him," so be on the lookout for Becks, and perhaps his wife (formerly Posh Spice) Victoria, on the town this evening.

For those nostalgic for Beckham's days captaining playing for powerhouse club Manchester United, Premier League play started for the season this month. A list of area pubs to catch European football is featured at the soccer fanzine site First Touch Online. Beckham is familiar with some other NYC athletes: Two weeks ago, he took a series of awkward-looking pictures with Yankees Derek Jeter and Alex Rodriguez.