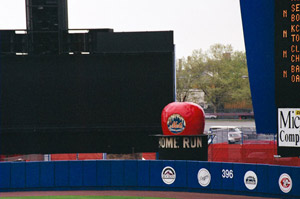 If you make it out to Shea Stadium the rest of this season and next season, and you witness a Mets home run, be sure to wave bye-bye to the Home Run Apple. We previously wrote about the movement to save the Home Run Apple when the Mets move to Citi Field in 2009, but recent reports makes it look like its days are numbered.

The Times reported yesterday that the apple will be retired during the move to the new stadium. Dave Howard, the Mets executive VP of business operations told The Times that "We are considering various possibilities to have it on display for our fans at Citi Field." Howard previously told the Daily News that "I appreciate the passion, but fans don't understand the reality that this particular apple is barely holding on and it wouldn't make any sense to use it in that manner. We will save it in an appropriate way." At least it's good to hear that the team won't be selling "authentic Home Run Apple Slices" to add to its revenue stream.

Despite the quotes out of the Mets front office, the two guys behind SaveTheApple.com are still hoping that the Shea apple sits just beyond the outfield walls at Citi Field. Their online petition now has 3736 signatures.