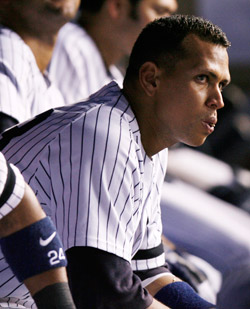 An ESPN report yesterday cited sources that say the Yankees are ready to offer Alex Rodriguez a record contract extension. The offer for the Yankees third baseman would be an extension in the range of five years and $30 million a year. Rodriguez is currently signed with the Yankees through the end of the 2010 season at $27 million a year, but can opt-out of his contract in the 10 days following the World Series, which could finish as early as tonight.

Scott Boras, A-Rod's agent and subject of a New Yorker article this week titled "The Extortionist", has previously hinted that his client would opt-out of his contract and test the free agent market where he would attempt to get a long term contract for A-Rod. If he does choose to opt-out though, the 2007 season would be his last as a Yankee. Yankees officials have repeatedly said that if A-Rod tests the free-agent market, they will not be one of the bidders. Part of Rodriguez's 2008-10 contract - to the tune of $21.3 million a year - is scheduled to be paid for by the Texas Rangers, who originally signed the 32-year-old to a contract after the 2000 season.

Before the season started, Rodriguez said, "My goal is to go in with Derek and Mo and open the new stadium." With Joe Torre gone, Mariano Rivera a free agent after the World Series, time will tell if A-Rod will choose to become a free agent or remain a member of the Yankees.