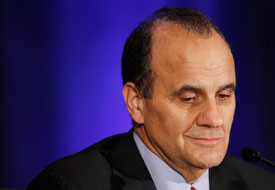 Well, it didn't take long for Joe Torre to find a new job (not that it should have). He's trading The Bronx for Chavez Ravine and "fans" like Rudy Giuliani for Posh Spice. The Post is reporting that the former Yankees manager has agreed in principle to a three-year $14.5 million deal (hopefully there are no performance incentives) to be the next manager of the Los Angeles Dodgers. He would be replacing Grady Little, who resigned as the Dodgers manager yesterday. The Post reports that an introduction of Torre could come as early as tomorrow - the same day the Yankees are set to introduce Joe Girardi as their new manager.

Also of note from the Post is this bit: "The Dodgers first made contact with Maury Gostfriend, Torre's agent, before Torre flew to Tampa two weeks ago and rejected the Yankees' one-year offer of $5 million with a chance to make $3 million more in incentives." As Torre's contract with the Yankees officially ends today, wouldn't the Dodgers contacting him two years ago be considered tampering?

Rumored to be joining Torre in Los Angeles is Don Mattingly, whose son Preston is in the Dodgers farm system. Another big name that is mentioned as possibly joining the team is the free-agent Alex Rodriguez. Next up on the Dodgers list of targets - Andy Pettitte, Mariano Rivera, Jorge Posada, Doug Mientkiewicz and Luis Vizcaino.