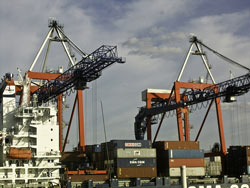 Under pressure from lawmakers and American Stevedoring, the company that operates the Red Hook container port, the Port Authority declined the City's offer to purchase the waterfront property and instead extended American Stevedoring's lease in Brooklyn for another decade. The container port has been eyed for several years by Mayor Bloomberg and developers, eager to turn the harbor property into condos, shops, marinas, and restaurants. Uncertainty over the port's future has cost American Stevedoring business in the last few years.

The Red Hook terminal is a vestige of the shipping industry that lined the shores of South Brooklyn until a much larger container port was constructed in Newark and Elizabeth, NJ. Still, the Red Hook terminal serves as a significant recipient of cocoa shipments and lumber bound for construction sites in New York City.

Under the terms of the latest agreement, American Stevedoring's rent for the four piers in Red Hook will be tied to the volume of shipping that passes through the port, but should total $41 million over ten years. The Port Authority will continue to lease the four gantry cranes that stand as a reminder of Brooklyn's industrial waterfront.