With a metropolitan population soaring near 6 million, it's helpful to have an inside track to Madrid's best views, whether that's on top, inside or on the periphery of some of the city's most iconic structures. Get ready for some selfies. This is a Madrid you won't want to forget.

Madrid's answer to Eataly, San Miguel Market's 33 stalls are a must-taste destination if your idea of the perfect view is from a bar stool with a glass of Rioja and a plate of tapas. The glass-walled building dates back to 1916 and is the only iron structured market left standing.

Meliá Hotels International has been part of Spain's hospitality scene since 1956 and the ME Madrid Reina Victoria —ideally situated on the bustling Plaza de Santa Ana—offers a rooftop deck that showcases the city in all its glory. Down below you can witness the bustling action as passers-by wander the winding streets to nearby Reina Sofia Museum or the Royal Palace, but chances are your eyes will be locked on the good-looking crowd decked out in Zara and other Spanish-centric brands.

Designed by architect Antonio Palacio and dating back to 1926, the Círculo de Bellas Artes is home to a range of artistic disciplines ranging from film and music to poetry and live theater. But it is the terraza on the seventh floor that attracts with locals and tourists alike. 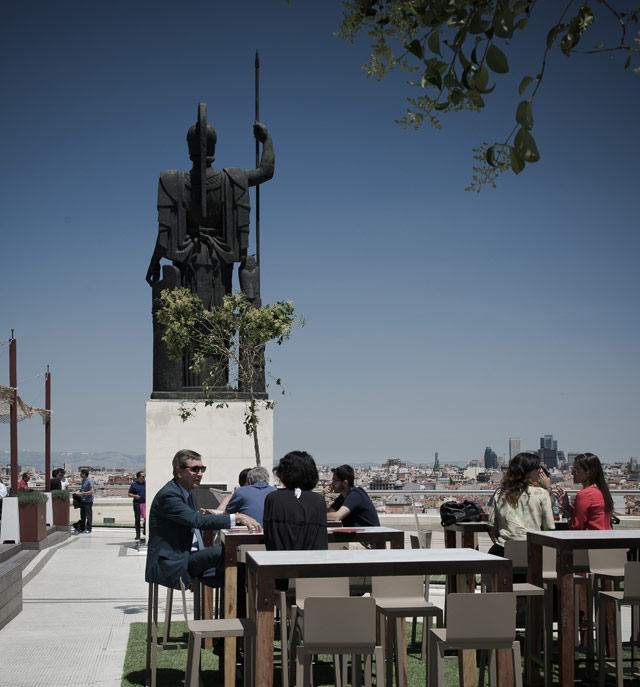 It costs €1 to access, but if you can snag a seat, it's the picture-perfect locale for sunset cocktails such as Tinto de verano, a simplified version of sangria that combines red wine, La Casera and a slice of citrus.

Cuartel d la Montaña Park offers more than young couples picnicking and distant cityscapes. It also houses the 2,000-year-old Temple of Debod, which was transplanted from Egypt to Spain one stone at a time. Originally dedicated to the gods Ammon and Isis, its original east-to-west orientation has been maintained.

History buffs can participate in a guided tour (Saturdays, 11:30 a.m. by appointment only) or the casual observer can wander the grounds free of charge.

For literary buffs, academics or those who simply want a brief respite from Madrid's bustling pace, Alcalá de Henares is a great bet. This UNESCO World Heritage site is the world's first planned university city as well as the birthplace of Miguel de Cervantes. The small Castilian-style home where Cervantes spent his early years contains original editions of Don Quixote dating back to the early 17th century.

Head to La Terraza del M`ercado for lunch with city views and be sure to stroll through the Plaza de Cervantes to appreciate the beautiful gardens.

#Alcalá de Henares
#Círculo de Bellas Artes
#Madrid
#ME Madrid Reina Victoria
#San Miguel Market
#spain
#Temple of Debod
#original
Do you know the scoop? Comment below or Send us a Tip
A new Gothamist is coming! We’ve moved comments over to our beta site. Click here to join the conversation and get a preview of our new website.