Quebec City Is A Winter Wonderland No one loves Quebec City's new slogan—"l'accent d'Amerique" or "the accent of America"—but it does get points for accuracy. The super-charming, French-speaking snow capital of Quebec actually is a highlight of North America. And you need to visit. Now.

Sure, the average high in December is minus 5 degrees Celsius (23 degrees Fahrenheit might sound warmer to you) but there's something to be said for braving frigid temps. It's actually fun—and where else can you have a pseudo-European adventure over a single weekend without taking time off work? Plus, for the rest of winter, New York will feel positively balmy. Here are a few reasons to convince you.

Traveling There Is Cheap

If someone said you could be transported from New York to Europe in less than two hours, under $300 round-trip, and minus the jet lag, you'd call them an idiot. Yet it's actually true. Getting to Quebec City (via the teeny Jean Lesage International Airport) is simpler than planning a week-long brie-and-baguette fest in actual France. Plus 95% of the population speaks French so you can just pretend. But you still need your passport.

As the only walled city on this continent north of Mexico, Quebec City wins points with history nerds. Old Quebec is designated an UNESCO World Heritage Site and the citadel, a 19th century fortress where you can learn about the city's history, is a must visit.

Changing of the guard at the Citadelle (Edward Fielding / Shutterstock.com)

You Can Get Your Foot in the Door

To celebrate the city's recent 350th anniversary, the Catholic-heavy Quebec City was given a Holy Door which opens onto the Notre-Dame Basilica Cathedral, the oldest Catholic parish in North America. Open until December 27—after which it's closed for 25 years—the door, which is sanctioned by the Vatican and is the first one outside of Europe, also invites "persons of good will" to enter, so no worries if the last time you went to church was Easter Sunday 1991.

In New York, snow's usually nothing but a nuisance, yet in Quebec City it's strangely transformative in the best ways. Crunch along the shopping-heavy Rue du Petit-Champlain where every store has an outdoor Christmas tree and don't even worry about buying anything (although you should pick up a postcard for your mom because it's a lost art). 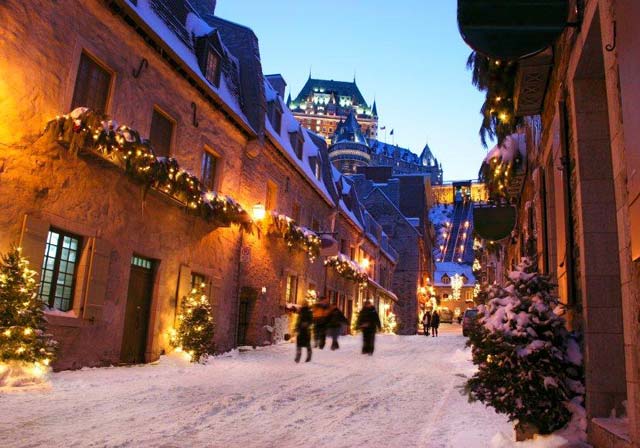 Now in its seventh year, the city's German Christmas Market runs from November 28 to December 14 and sees dozens of vendors sell traditional wares—everything from handmade wooden ornaments to classic toboggans—in miniature booths outdoors at the Place de l'Hotel de Ville and in the gardens of the Hotel de Ville. You can snack your way through on warm chestnuts and soft pretzels, and stollen—the only dessert that'll redefine your ill will towards fruitcake—ending at a perfectly-realized alpine ski chalet with plenty of mulled cider and mulled wine. 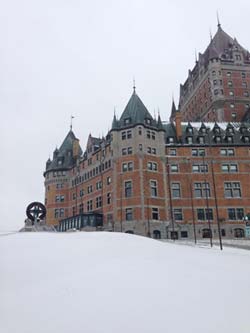 They Embrace the Cold

Only in Q.C. kids, only in Q.C. would there be an outdoor carnival in the dead of winter. The Carnaval du Quebec draws people from around the world and this year runs from January 30 to February 15. There's snow sculpting, sleigh and canoe races, a snow bath (where people put on bathing suits and dip in the water—best of luck to them) and an ice palace. When you can no longer feel your toes, just head straight for the indoor whisky tasting.

They've Got a Castle...Sort Of

After undergoing a 15-month renovation, the Fairmont Le Chateau Frontenac is fancier than ever. Situated on the sometimes pulsing, sometimes frozen St. Lawrence River, the 120-year-old hotel is said to be most photographed in the world—and that's not only because it's forbidding architecture forms the crux of the Quebec City skyline (best seen from the short ferry ride to Levis). Despite looking like a castle, it actually never was, but that didn't stop 3,000 people—tourists and locals alike—from getting an up-close look at an open house earlier this year. Stay for a special occasion or pop by the new Le Sam bar and head mixologist Nader Chabaane will convince you to like spirits you've sworn off forever.

You'll forget that it takes 10 minutes to swaddle and unbundle yourself after going indoors, because once you do, people are kind and quick to offer a bonjour and/or switch straight to English if your college French fails you. Maybe it's because they're used to the cold, or the people who gave us Celine Dion are just genuinely cheerful. But if New York gets socked by the polar vortex again this year, it might be nice to escape to somewhere that doesn't only tolerate winter, but embraces it.

#canada
#gothamist getaways
#Quebec City
#travel
Do you know the scoop? Comment below or Send us a Tip