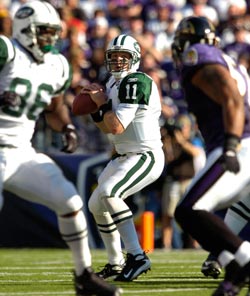 Ready for a quarterback controversy? Kellen Clemens took a while to get his feet under him, but he almost led the Jets back in their 20-13 loss in Baltimore. A drop and a poor throw of his own cost Clemens down the stretch, and the Jets are 0-2. At least they didn't go weakly into the Baltimore night. If not for Justin McCareins' buttery fingers, this game would have gone to overtime. This performance won't make it any easier for Coach Eric Mangini to stand by Chad Pennington as his starting quarterback when the Week 1 starter recovers from an ankle injury.

Jerricho Cotchery joined Clemens in making waves. The receiver had seven catches for 165 yards -- including a 50-yard catch -- to give the Jets hope that a playmaker could be found outside of Laveranues Coles.They hope this performance against a tough defense on the road is a sign of things to come.

At some point, the Jets will need to step up against teams that provide tough challenges. The loss to New England -- especially after the Patriots' whupping of the Chargers Sunday night -- is more than excusable. No one can kill the Jets for losing at Baltimore either. But a season can't be judged on individual games, and losses that look OK in a vacuum add up as the season goes along. A team trying to build off its playoff appearance of last year needs to respond to challenges. It will also need to take care of business against lesser teams. The Jets will have their chance next week against the Dolphins at home in the first of three plainly winnable games. Combine that stretch with Clemens and Cotchery, and the Jets have reason to believe they can get back on track.