Problems with Scaffolding in Fatal Collapse 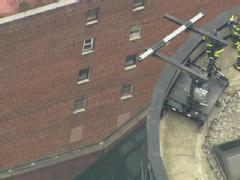 The scaffolding around an East 66th Street building that collapsed and left one brother dead and another critically injured had a number of previous violations. The Daily News reports that the scaffolding had been cited 10 times in June, and the "violations included orders to repair a safety railing and the main roof, provide padding for workers and adjust an overload detection device."

Brothers Edgar and Alcides Moreno were moonlighting for City Wide Window Cleaning as window washers. They stepped onto a platform, attached to scaffolding on the building, and the platform broke off. Edgar immediately plunged over 40 stories, Alcides seemed to have held onto the platform. Neither was wearing the required safety harnesses. The company's owner Michael Hoszowski told the Post the scaffolding was cleared for service, "Accidents could happen. Sometimes by negligence, sometimes by other factors." But when asked if he okayed using the scaffolding at the building on Friday, he said another supervisor was in charge and made that decision.

Yesterday, the NY Times wondered how Alcides Moreno managed to survive, though critically injured, the 47-story fall. There are also questions about how much training the Morenos had, because the city "requires people who work on a suspended scaffold to have a certificate showing they have completed a safety course," as well as requires that contractors have a "licensed master or special rigger, who can designate a foreman to oversee a job" - the Department of Buildings and OSHA are investigating.

#Alcides Moreno
#city
#daily news
#dangerouswork
#department of buildings
#news
#ny times
#people
#safety
#the city
#the daily news
Do you know the scoop? Comment below or Send us a Tip