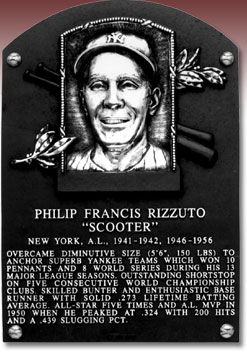 Former Yankees shortstop and long-time announcer for the team Phil Rizzuto died this morning at the age of 89. Rizzuto played his entire professional baseball career with the New York Yankees after being selected by the team as an amateur free agent in 1937. He wouldn't play his first major league game with the Yanks until 1941, but then served as shortstop for 13 seasons, during which the Bronx Bombers won 10 Pennants and 8 World Series Championships.

Rizzuto was cut rather abruptly from the team in 1956, after a professional career that secured him a spot in the Hall of Fame in Cooperstown. The very next year he was back in the Bronx, however, at the insistence of broadcast sponsor Ballantine Beer, who wanted Scooter in the announcers booth. Rizzuto would spend 40 years calling Yankees games, along with men like Mel Allen, Joe Garagiola, Bobby Murcer, Billy Martin, Frank Messer, and Tom Seaver. For generations of Yankees fans, Phil Rizzuto wasn't just an eventual Hall of Famer and former player, he was the voice of the New York Yankees.

Scooter was a native of Brooklyn, NY, whose father was a streetcar motorman. The first time he ever left home was after he signed with the Yankees and the organization sent him to rural Virginia to play minor league ball. His career was briefly interrupted as he served in the Navy during WWII, although he claimed he would get seasick while just taking the ferry in New York. Beginning his career as an announcer, Howard Cosell told him he would never last and that "You look like George Burns and you sound like Groucho Marx." During his 1994 induction address at Cooperstown, Rizzuto exclaimed "Thank God for baseball!" He didn't know what he'd have done with his life without it. Video of that address can be viewed in its entirety here.