Pats Cheat and Get Caught 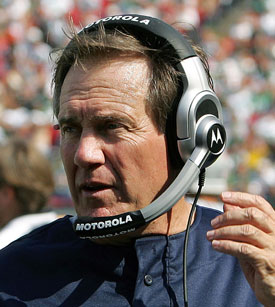 If you're following football, you may have heard that the New England Patriots were caught cheating during Sunday's game against the Jets. They're accused of videotaping Jets coaches as they sent plays into their defense using hand signals. Maybe that's one reason the Jets got trounced, 38-14 to open the season. The use of video is against NFL league rules, and a league spokesman told ESPN, "The rule is that no video recording devices of any kind are permitted to be in use in the coaches' booth, on the field, or in the locker room during the game." Clubs have also been reminded that videotaping of offensive or defensive signals is prohibited.

NFL security confiscated a video camera and tape from a Patriots employee during the game. While the NFL spokesman said teams were reminded about the videotaping rule, it seems like New England coach Bill Belichick told NFL commish Roger Goodell that he has his own "interpretation of the rules." The same Patriots employee that was caught at the Jets game was also caught videotaping plays during a game against the Green Bay Packers last season.

Stealing plays is a common occurrence - teams use decoy play callers and coaches cover their mouths when talking on a headset - but we've never heard of a team stupid enough to get caught while taping. The NFL has not decided how to punish the Patriots yet, there are talks of taking away several draft picks. One person that isn't surprised by Patriots spying is LaDainian Tomlinson, who joked, "I think the Patriots actually live by the saying, ‘If you’re not cheating, you’re not trying.’"

If you're going to cheat, we say, bring back the use of binoculars!