The famous line "The coldest winter I ever spent was summer in San Francisco" may not have actually been uttered by Mark Twain, but nevertheless, it captures the chilly experience that those who have visited the Bay Area during traditional tourist season might have encountered.

September and October, however, are typically sunnier and still reliably dry making it the perfect travel destination for East Coasters who shiver at the thought of cooler days ahead. (Though don't let any precipitation-starved Californians catch you rooting for continuing drought.) While San Francisco is the first place most think of when planning a trip to NorCal, the city of Oakland, just across the bay, has emerged on the domestic travel radar as a destination in its own right. In recent years, Oakland has exchanged its image as a crime-ridden urban area for one that's more "Brooklyn of the West."

Of course, locals (except for the mayor) shudder at this comparison, but the one parallel is that Oakland is a historically diverse city that today brims with civic pride, creativity, and great food. But Oakland's definitely doing its own thing, and there's more than enough going on to merit consideration for a dedicated trip—just ask the city's most famous resident (and current California governor), Jerry Brown. 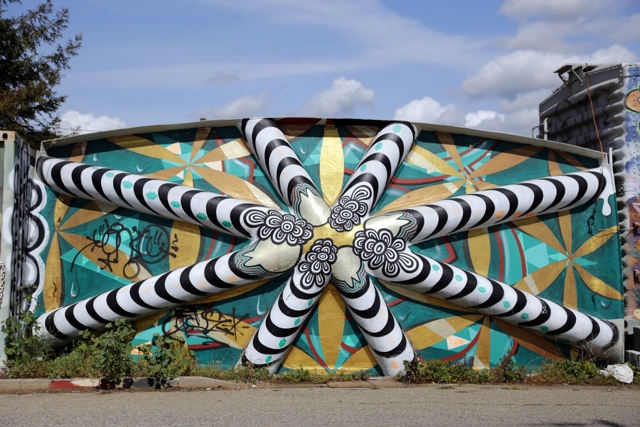 Essentials Oakland has its own airport, which is closer and easier to navigate than SFO. JetBlue has a small number of direct flights from the New York area (Delta, Southwest, and other airlines offer connecting service). Oakland is serviced by BART trains and buses and individual neighborhoods are walkable, but the city isn't as densely urban as San Francisco, so if you really want to explore or tack on a trip to wine country, consider renting a car. The downtown area has a number of large hotels; for more personal accommodations, Airbnb is your best bet.

Attend the 20th Anniversary Days of the Dead celebration at the Oakland Museum of California.The Oakland Museum of California is a multi-disciplinary institution whose collection focuses on art, history, and natural sciences. It should be on the itinerary for all Bay Area tourists, as the broad reach of its collections offer visitors an entertaining and dynamic look at the culture and landscape of the state. (Exhibitions this fall include a group show on California landscape painting, a history of community art in California, and an exhibition on San Diego ComicCon.) 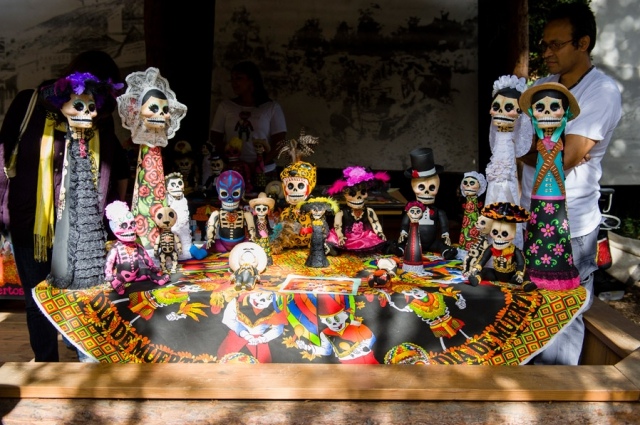 20th Anniversary Days of the Dead (The Oakland Museum of California)

This year, consider planning a trip to coincide with the museum's annual Días de los Muertos celebration on October 26th, which features music and dance performances, cooking demonstrations, and an open-air mercado selling Days of the Dead relics made by local artists. In honor of the twentieth anniversary of the museum's celebration, the museum is also holding a special exhibition that explores Mesoamerican and California expressions of this locally beloved tradition, from pre-Hispanic funery artifacts, to Mexican folk art, to pieces by contemporary artists.

Take a coffee (and cookie) break at Blue Bottle in Jack London Square. It should come as no surprise that this city is full of great coffee bars, but only Oakland native Blue Bottle boasts the inventive baked goods of Caitlin Freeman, Blue Bottle's head pastry chef, along with freakishly fresh never-more-than-48-hours old coffee. 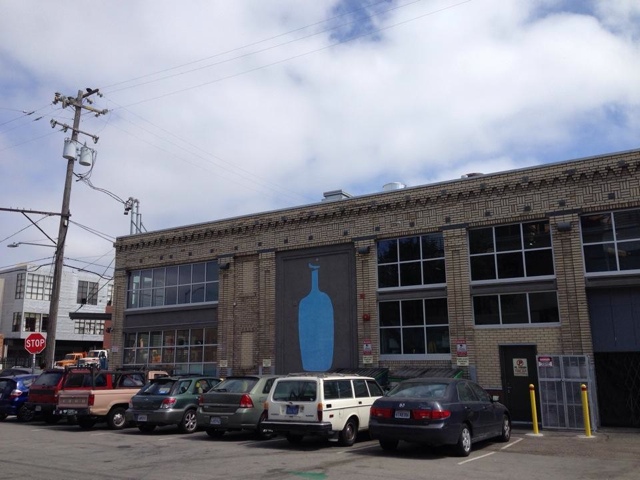 Freeman is best known for her incredible pastry interpretations of works of modern art that were sold in Blue Bottle's SFMoMA location. (Those recipes were collected into this book.) That café is currently closed while the museum undergoes its three-year renovation, so until it reopens, visit Blue Bottle's Jack London Square location, and grab one of her saffron Snickerdoodles and a latte to enjoy on a stroll along the waterfront. Or stop by on Sunday and Tuesday afternoons at 2 p.m., when the shop hosts free public tastings.

Experience Oakland First Fridays. Lots of cities and towns put on "First Friday" events; Oakland has elevated this kind of tame local gathering into a vibrant destination-worthy evening of arts, foods, and fun. Oakland First Fridays grew out of a monthly gallery walk started in 2006 by Oakland Art Murmur, an organization that promotes local artists. 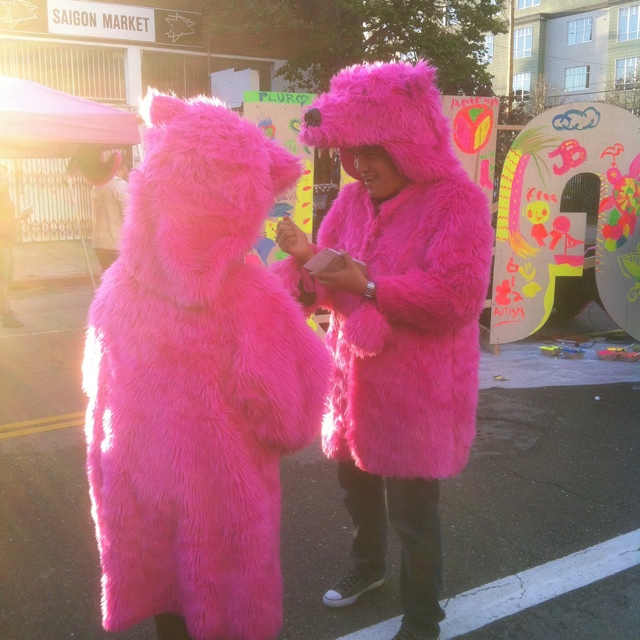 Since then, it's become a community block party that draws people from around the Bay Area to the city's Uptown district, with participants and vendors that now include everything from local artists and craft makers to musicians, dancers, street performers, activists, and of course, food vendors. First Fridays take place from 5-9 PM on the first Friday of every month. The street festival is located on Telegraph Avenue between West Grand and 27th Street.

Get a hoodie at Oaklandish. Oakland's civic pride looks best in Oaklandish, a clothing company that adapts symbols of the city—the oak tree, the Bay Bridge, the OAK airport code—into cool, screenprinted designs. The company backstory is signature Oakland—the t-shirt line was spun out of a street art campaign promoting the city's cultural legacy—and its mission is still to use its merchandise to spread the message of "local love" and give back to the community.

Everything is made in the USA, printed by hand in Oakland, and ten percent of profits are donated non-profit community groups through their Innovators grant program. Visit the original shop in Downtown Oakland and pick up the city's sweetest souvenir: A hoodie with the company's logo, an oak tree with roots spreading as wide as the leaves on top.

Get a taste of California at the Grand Lake Farmer's Market. Just east of downtown Oakland is Lake Merritt, an enormous tidal lagoon surrounded by parks, playgrounds, and running paths. During the day, you can walk or jog the perimeter and visit the geese and ducks that roam the area; in the evening, watch the sun set from the Lake Chalet restaurant overlooking the water and watch the lake become illuminated by the necklace of lights that circle the perimeter. 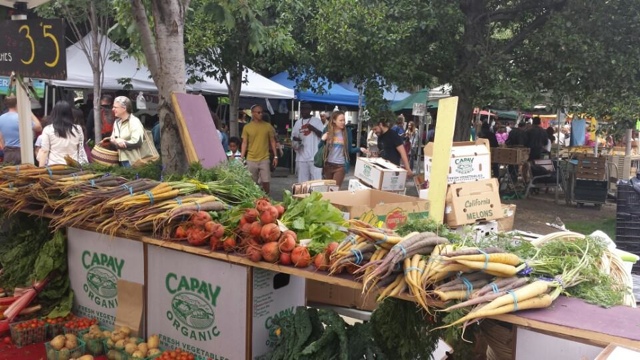 On Saturday morning, there's a farmer's market by the lake's northeast corner where you can sample all of the great produce and food products from this great agricultural area. Don't miss the persimmons—a local delicacy in the fall—or the excellent cheese and ice cream from Straus Creamery. The Grand Lake Farmer's Market is held from 9-1 on Saturday mornings throughout the year.