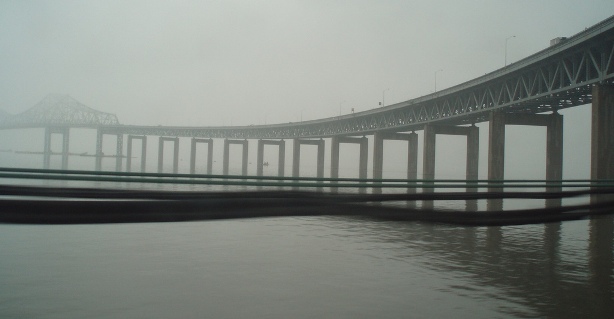 As many people wonder about the state of the bridges in the New York City region, in the wake of I-35 collapsing in Minneapolis, the city's Department of Transportation is trying to reassure residents that our bridges are safe. Though many bridges meet the definition of "deficient" - 19% of bridges are in "fair" or "poor" condition, 15% meet the federal definition of "structurally deficient" - a DOT first deputy commissioner Lori Ardito says, "In New York, we do not have any bridges that are structurally deficient."

Regular people had mixed opinions: Calvin Thomas told the Daily News, "You don't know how they maintain these bridges. I can't tell by looking at it but I'm sure even this bridge needs maintenance." On the flip side, Jennifer Cain mused to the NY Times, "I think because it's been up for over 120 years, [the Brooklyn Bridge has] got to be safe." And Joe Rainer said to the Sun, "I probably have a better chance at Atlantic City than falling off that bridge."

The Post has an article about infrastructure with an interesting quote from former DOT assistant commissioner Sam Schwartz (who also appeared on the Today show):

Schwartz also believes that that no more than 1% of bridges should be structurally deficient (the statewide average is 9%), "It’s too hard to monitor all those bridges with greater frequency.”

The Post shows all bridges in fair and poor conditions with photographs, while the Daily News pinpoints them on a map. WCBS 2 had tips on how to escape a sinking car; there are some detailed instructions but an easy way to keep the principles in mind is "POGO: P -- Pop the seat belt; O -- Open the window; GO -- Get out." And the News' Michael Daly had a column titled, "Minnesota sadly gets a Ground Zero."

Currently, five people are confirmed dead from the I-35 collapse; about seven others are missing and presumed dead. Interesting: The Minnesota DOT was worried about cracking in the bridge and considered putting steel plates in the supports last year; but then it worried that bolting the plates would weaken the bridge.

Photograph of the Tappan Zee Bridge, which has a structure similar to I-35 and is not maintained by the DOT, mysticchildz on Flickr