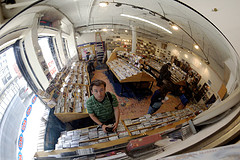 Time Out New York is telling secrets and talking about all the little things that make up this city (for instance, did you know a baby was baptized in the lobby fountain at the Guggenheim?). Some of our favorite items dished include:

• Other Music keeps the gold record The Strokes gave them in their store bathroom, where it has hung for many years.

• At Carnegie Hall photographers get their up-close stage shots through a closet in the maestro's dressing room! An employee "unlocks the closet, at the bottom of which is a two-foot-high metal door. A mat inside is rolled out and the photographers lie on their stomachs and point their lenses through the small window toward the maestro onstage." That's just plain weird.

• Mickey isn't the only ghost at the Ear Inn. Some less-friendly phantoms reside in the residence upstairs, owned by the proprietor of the Inn. After the last family to live up there was chased out by the ghosts however, the space is now used for storage. As for Mickey, the spirit of an a sailor and onetime regular, he'll be messing with the customers at the bar for a long time to come.

Also whispered about: the Seaport Music Festival, the peep hole outside of Brooklyn's Brick Theater and if you've ever wondered where your bartender went for so long at The Sullivan Room...he or she probably just went over to the Lion's Den through the shared secret passageway. For more Gotham City gossip there's always the show on Channel 25, or you could follow the yellow arrow. So...what do you know?