New York and the Fourth 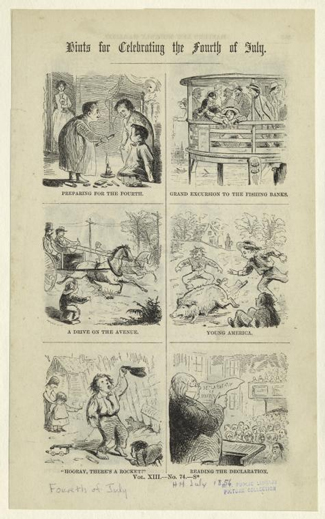 The New York Public Library is closed today––it is a national holiday––but New Yorkers should be proud to hear that the main branch on 42nd St. and 5th Ave. has been entrusted with one of two surviving copies of the Declaration of Independence, written by Thomas Jefferson himself. The document is a handwritten duplicate of the document signed in Philadelphia 231 years ago, asserting the original thirteen colonies' indepedendence from England and starting the American Revolution.

New York City may seem like an unlikely repository for the document. After the nearly disastrous Battle of Brooklyn in August 1776, when George Washington's triumph was that he escaped to New Jersey without the total destruction of his army, the city remained firmly in British hands until the end of the war. The author of the Declaration of Independence, Thomas Jefferson, loathed New York City and The New York Sun reports that he described our fair city as "a cloacina of all the depravities of human nature."

According to the encyclopedic history of early New York, "GOTHAM", the New York Provincial Congress didn't assent to the Declaration of Independence until July 9th, but the document was read to a gathering of troops and New Yorkers that day. The rowdy group then marched down Broadway to the Bowling Green, where it toppled a statue of King George III. The head of the statue was mounted in a pike outside a tavern at Broadway and 181st St. The rest of it was transported to a foundry in Connecticut where it was melted down and used to make musket balls for the army.

The Declaration of Independence will be available for viewing in the Wachenheim Gallery on the first floor of the New York Public Library's main branch until August 4th. The exhibit's schedule is here.

(Hints for Celebrating the 4th of July, from the NYPL's Digital Gallery)