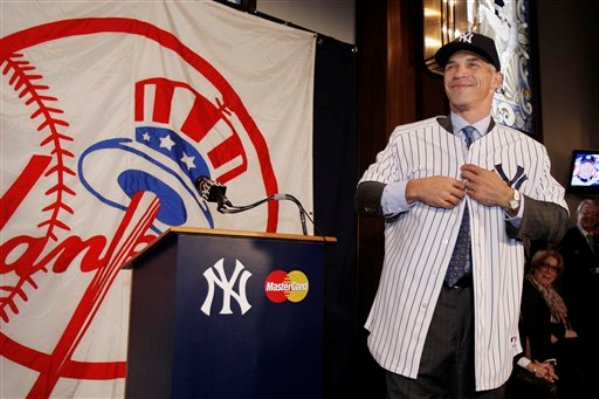 Joe Girardi made his first appearance in Yankee pinstripes as the new manager today. He chose the number 27 for his jersey, referring to more World Series wins in the Yankees' - and his, he hopes - future as the Yankees have 26 World Series championships. The former Yankees catcher said, "The team's expectation is always going to be to win the World Series. It's not going to change."

He also mentioned that he spoke to George Steinbrenner (he said, "It's great to have you aboard"), Joe Torre ("We had a great conversation") and even Don Mattingly, who was very interested in the manager's job (Mattingly told Girardi he wasn't interested in coaching for the Yankees).

Other aw-moments during the pres conference: Girardi revealing his Alzheimer's-striken father hadn't spoken for a month until he saw a picture of Girardi chosen as Yankees manager and Girardi's wife Kim being given a bouquet of flowers by Yankees general manager Brian Cashman. WNBC has video of Girardi's introduction.

And the AP notes that when Joe Torre joined the Yankees in 1995, the Daily News headline was "CLUELESS JOE" with the sub-head "TORRE HAS NO IDEA WHAT HE'S GETTING INTO" - tomorrow's headlines should be fun!