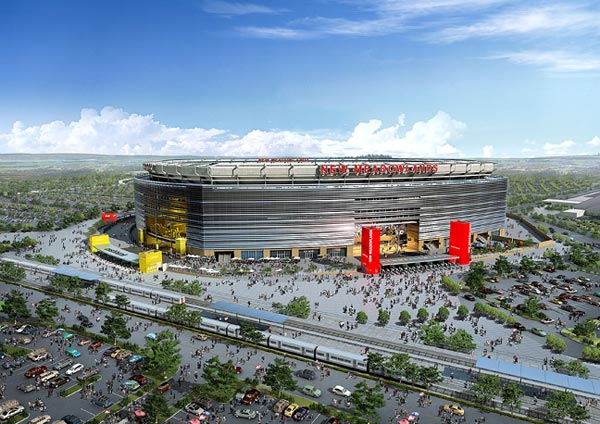 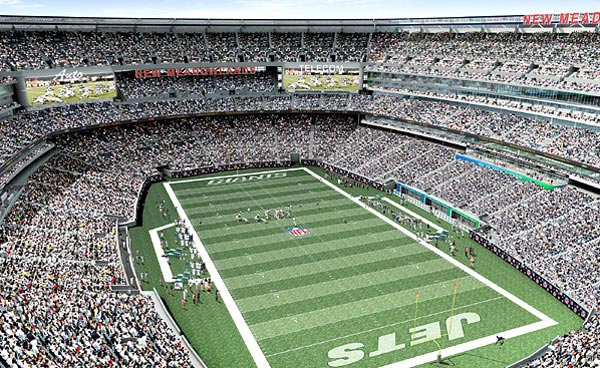 Our neighbors to the west broke ground today on a new stadium for the Giants and Jets at the Meadowlands. Rather, officials officially broke ground today, since it's obvious to anyone that's been to the Meadowlands that construction on the new two-team stadium has already started. The $1.3 billion stadium will be jointly owned by the two teams and make both feel at home, unlike Giants Stadium, which irritates the Jets and their fans.

Architects for the new stadium have designed features that will accommodate both teams. Move over China, because the yet-to-be-named stadium (they're looking for a sponsor) will have its own "Great Wall," with 400' long by 40' high panels that will feature either the Giants or Jets logos. The stadium, which will seat 82,500 and is scheduled to open for the 2010 season, will also feature an outer skin of aluminum louvers which may change colors depending on the team as well. Interior lighting is already designed to change colors based on the stadium's home team.

With the stadium construction boom for all the local professional sports teams, we're surprised that the Jets and Giants didn't come away with a stadium each. Of course, the reason for that could be the whole West Side Stadium/NYC 2012 debacle. Stadiums are nearly finished/under construction/planned for nearly every local team. The Devils start their season this October in Newark, the Red Bulls are building in Harrison, NJ, the Yankees and Mets both have new stadiums underway, and the Nets have a planned stadium in Brooklyn. If Moynihan Station is ever built, it's possible that there will be a new MSG for the Knicks and Rangers as well.