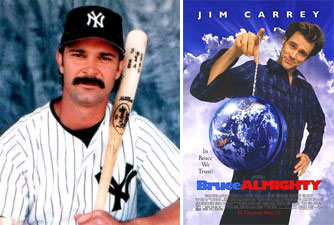 Tonight, the Yankees will face off against the Cleveland Indians at Yankee Stadium, and many hope the Bronx Bombers can avoid the sweep (and mayflies) and claw their way back to winning this first round of playoff games. Since things are so nerve-wracking, we thought some Yankees fans - and even haters - might be find this Village Voice story funny.

Found amongst the paperwork that showed how the Yankees were basically billing the city - and its taxpayers - for things like "12 crystal baseballs" ($1,620 total) and $26,000 in food and bar tabs, thanks to a clause in the lease with the city that allows the Yankees (and Mets) to deduct "planning costs" from their rents, was the sheet that showed the fake names Yankees players and coaches used at hotels in 2005. The Voice lists a few, with some thoughts:

Pseudonym: Bruce Almighty
Real name: Don Mattingly
Interpretation: As the Mets found out this year, it's not that easy replacing Rick Down.

Pseudonym: Johnny Drama
Real name: Derek Jeter
Interpretation: Desire to be the sidekick in somebody else's entourage for a change, or resentment at being upstaged by your infield "brother" — you make the call.

Pseudonym: Turd Ferguson
Real name: Jaret Wright
Interpretation: SNL has been painful to watch most of the last decade, too.

Plus there are others from Hideki Matsui, Bernie Williams and Jorge Posada. It's all hilarious.

The other funny thing about the Yankees lately: LeBron James' allegiance to New York. Who knew he'd have the chutzpah to wear a Yankees cap to Game 1?