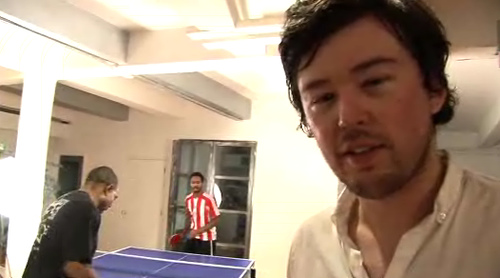 The NY Times takes a look inside the ping-pong world of New York. Sure, it may not be as big as the US Open, but the Naked Ping-Pong tournament is growing bigger and better every week out of a loft in Tribeca.

The tournament (which is actually fully-clothed) was started by three friends in their 30s who hope to bring table tennis to the forefront of urban sport. The Times introduces them as "Jonathan Bricklin, 30, son of the automobile entrepreneur Malcolm Bricklin of Yugo fame; Franck Raharinosy, 32, his roommate; and their baby-faced friend Bill Mack, 33, once a child actor whose credits included a stint on Sesame Street."

With four tables set up each Tuesday and Friday, they charge $20 to get in (a fee that includes drinks) and $10 to play. The scene is described as fashionable (iPhone chic?), and the deejay may help you keep in the game by spinning rhythmic beats. It seems that style may be more important than skill level in some cases, the Time reports that "the other night, the supermodel Veronica Webb, wearing a black, V-back cocktail dress, took her turn at the table, missing often, her beaded necklace swinging wildly back and forth. Between volleys, she beamed through perfect teeth." Keeping it interesting at the tables are regulars like Wally Green, "who grew up in the housing projects of Coney Island and likes to calls himself the Tiger Woods of Ping-Pong." He can beat anyone using a cell phone over a paddle.

The trio is also in training for the 2012 Olympics, working with a coach and taking on regular games at the Coney Island Russian, Lower East Side and Chinatown Ping-Pong clubs. What the Times doesn't mention is this underground ping-pong scene in New York, with games not only at the aforementioned clubs, but also at churches in Greenpoint - and tables often replacing the traditional pool table at bars. If you want to see what the Naked tournaments are all about, bring your A-game or your best smile and try to get in. Maybe Patton Oswalt will make a cameo one of these nights.