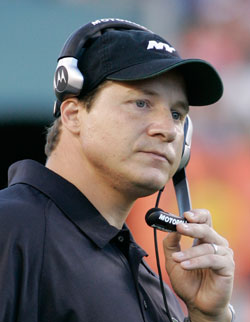 If they want to, the Jets can trace the morphing of their season from disappointing to disastrous from their Week 4 loss in Buffalo on Sept. 30. Before that, their only defeats came against the Patriots and the Ravens. Those are nothing to be ashamed of. But now the team hasn't won since a Week 3 squeaker against the Dolphins, and, let's face it, everybody's beating Miami these days. The Jets will try it all over again at home this Sunday, but the change everyone wanted made hasn't happened. Chad Pennington is still the quarterback.

At this point, even Pennington's most ardent supporters have to be getting tired of him. The offense is two-dimensional with Pennington's difficulty going deep. With the season lost, Kellen Clemens has a chance to learn on the job without risking team success. Instead, whether it's because he's stubborn, knows more than everyone else or just thinks he knows more than everyone else, Coach Eric Mangini is sticking to his guns weak-armed quarterback.

These Bills are no pushovers. They lost to Denver on a last-second field goal, and they also blew a game late at home against Dallas. Last week they beat Baltimore at home. With Trent Edwards at the helm, everyone seems a little more energetic. In a strange story, the Jets' Jonathan Vilma has said he's not hurt, but rumors have him ending up on injured reserve soon. He won't play this week in a critical blow to the Jets defense. An uninspired team could be facing an uphill battle Sunday.