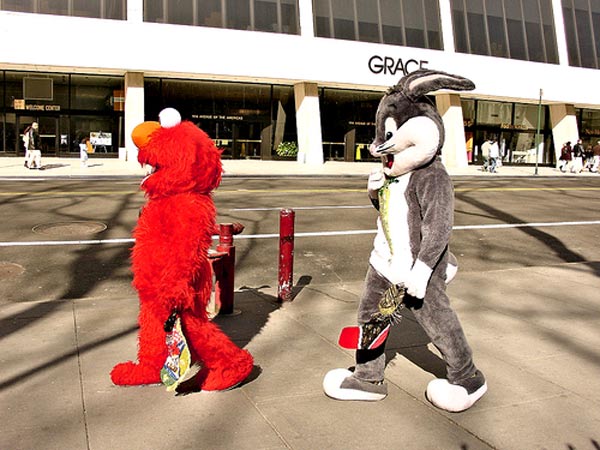 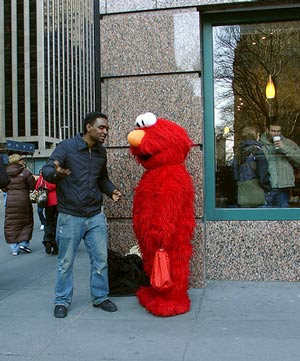 Last weekend, reader RGP saw two people dressed as Bugs Bunny and Elmo walking around 42nd Street in Manhattan. While the pair could have been out to bring Easter cheer to crowds, it seems unlikely since they were carrying Christmas stockings.

RGP wrote they "came out of the subway and just kind of meandered around" and noticed "Elmo had 'I Love You!' painted in big white letters on his mouth." Hypothesis: Two people found the costumes in dumpsters and decided to go the whole cartoon, "thinking they'll get some tips if they wander around in these suits and take pictures with people."

Six days later, while walking around the same area, RGP wondered if she would see Elmo again and "Sure enough, there he was Elmo, in the flesh. Or rather, polyester fur. But now he's traded in his christmas stocking for a matching red plastic bag. Bugs was nowhere to be seen but I speculated that the man standing next to him was Bugs."

Or perhaps the man could have been telling Elmo how to get to Sesame Street (our guess: the 7 train).

#42nd Street
#bugs bunny
#elmo
#midtown manhattan
#odd
Do you know the scoop? Comment below or Send us a Tip
A new Gothamist is coming! We’ve moved comments over to our beta site. Click here to join the conversation and get a preview of our new website.